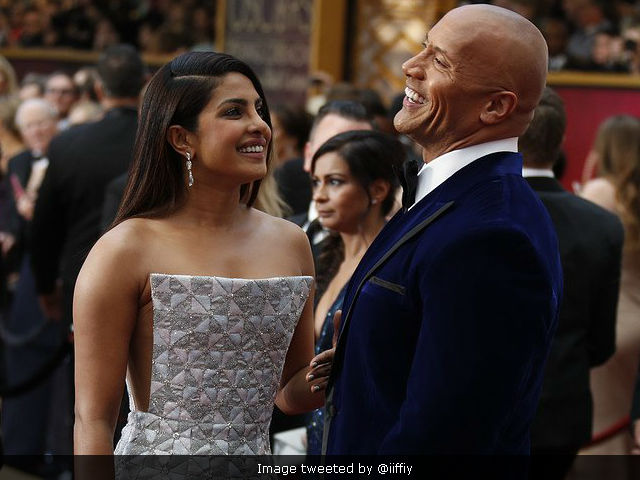 New Delhi: Priyanka Chopra is currently in India, having wrapped the second season of her popular TV show Quantico. Priyanka is now gearing for the release of her Hollywood debut Baywatch, which is scheduled for June 2 in India. Priyanka has already jumped into her promotional duties for Baywatch in India and at a recent event in Mumbai she was joined by her co-star Dwayne The Rock Johnson via a video message. It appears Priyanka's Baywatch-special tours in India will be minus Dwayne Johnson for a while, for which the 44-year-old actor apologised and said: "I am so sorry I couldn't be there with you. Priyanka and I had talked about this for months. Coming to India would've been my first time. I cannot wait to come. I wish I could've joined you this time," reported news agency PTI.

Dwayne Johnson, who has often spoken about his fondness for Priyanka as an actor, also said in the video: "I've been told this video is going to play in a very big press conference, based around someone who is very important and special to me. Someone who is incredibly talented. Priyanka Chopra. You're the best, I love you. I am sure I am making you blush."

The former wrestling champion expressed his eagerness to visit India and directly addressed his fans and followers through the video. "Over the years, whether it was my WWE or movie career, you have shown such incredible love and support to me. Thank you so much. I look forward to one day coming to your great country and saying hello and sharing my gratitude in person," PTI quoted Dwayne Johnson as saying in the video.

Meanwhile, Team Baywatch released a new trailer of the much talked about film on Wednesday, which will make up for Priyanka's blink-and-miss appearances in the previous trailers.

Lol! Just Look at me @TheRock U think I'm gonna b intimidated by a bunch of swimsuit calendar alumni? #BeachPlease@baywatchmovie#May25. https://t.co/IV1uRsq9dY