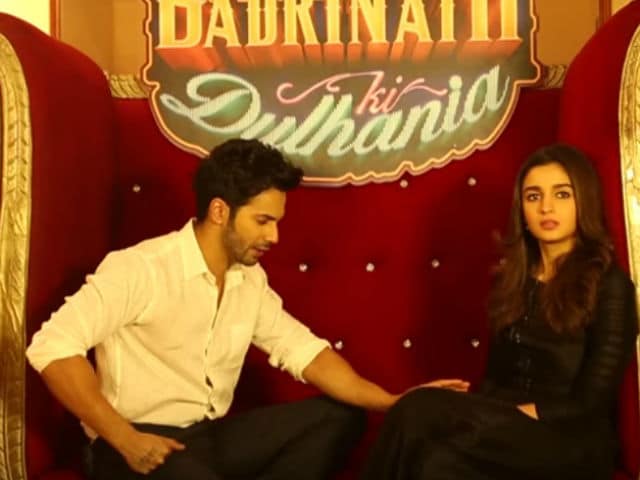 New Delhi: Actor Varun Dhawan is the well-intentioned but unpolished Badrinath and Alia Bhatt the Womaniya he hopes to make his Dulhania - and that's a formula guaranteed to create fireworks on set. In a behind-the-scenes video released of upcoming film Badrinath Ki Dulhania, Varun reveals, among other things, "this is the only film in which I have not touched the heroine." As the object of Badri's affections Vaidehi, "Alia has never looked prettier," Varun says. Aww. We forgive you your 'Rani Ki Jhansi' flub, Varun. "Vaidehi is the best girl in the world. If Vaidehi actually existed I would have married her by now," he declares. Okay then.

Does Alia Bhatt return Varun Dhawan's fulsome compliments about her character and the way she plays her? We'll let you find out for yourself.


Badrinath Ki Dulhania is a sequel of sorts to 2014 hit Humpty Sharma Ki Dulhania, in which Varun and Alia played similarly lovelorn vs recalcitrant characters. Humpty Sharma eventually proved dilwala enough to carry off his dulhania - will Badrinath be as lucky? The film, directed by Shashank Khaitan and produced by Karan Johar, also stars Gauahar Khan and will release on March 10.

Promoted
Listen to the latest songs, only on JioSaavn.com
Meanwhile, Varun Dhawan and Alia Bhatt were spotted in engaging Twitter chat, in which Varun requested Karan Johar to ask Alia to sing Humsafar as she can't say no to her Student Of The Year director. This got Varun and Alia's fans excited and they urged the actress to sing as well. Varun and Alia debuted in Student Of The Year together and Badrinath Ki Dulhania is their third film together.