Released on Tuesday, the trailer of Badhaai Ho scored over 10 million views with over nine million from YouTube itself 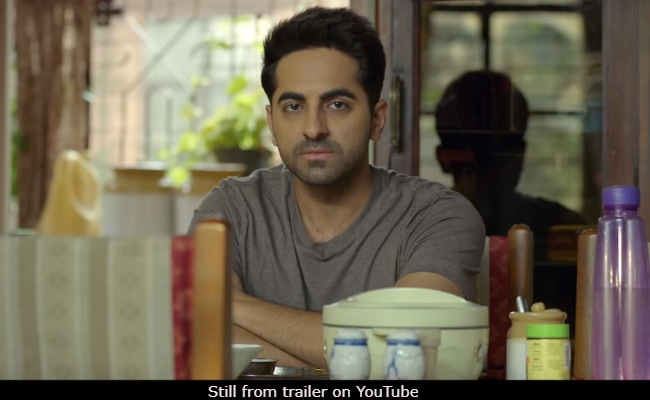 Still from the trailer of Badhaai Ho (courtesy YouTube)

Ayushmann Khurrana has a unique way of promoting his new film Badhaai Ho, which has taken the Internet by storm and continues to feature on the list of trends. Released on Tuesday, the trailer of Badhaai Ho scored over 10 million views with over nine million from YouTube itself. Sharing the numbers, this is what Ayushmann tweeted on Wednesday: "10 million se zyaada logon ne toh dekh hi liya, par aap mat dekhna. Firse bol raha hoon yaar, mat click karo link par." That the Badhaai Ho trailer was cut to go viral is not surprising for those who have watched it and rolled on the floor laughing, clutching their tummies.

Badhaai Ho is a new age family comedy, which reveals how a lower middle class family deals with society's raised eyebrows. It all begins when Neena Gupta, who plays Ayushmann's mother in the film, announces she's pregnant. As much as Ayushmann congratulatory messages, dipped in pure sarcasm, pour in for the would-be big brother, who is not too comfortable with the recent development in the family.

Meanwhile, Neena Gupta, who takes the center-stage in the trailer, told news agency IANS that she immediately jumped on board when the project was offered to her: "I did not even read the script of the film because the subject was so interesting. Female actors of our age don't get a chance to play such interesting characters. This phase of our life is not addressed only in our Hindi cinema. But I think the change is happening because of the youngsters who are writing such scripts."