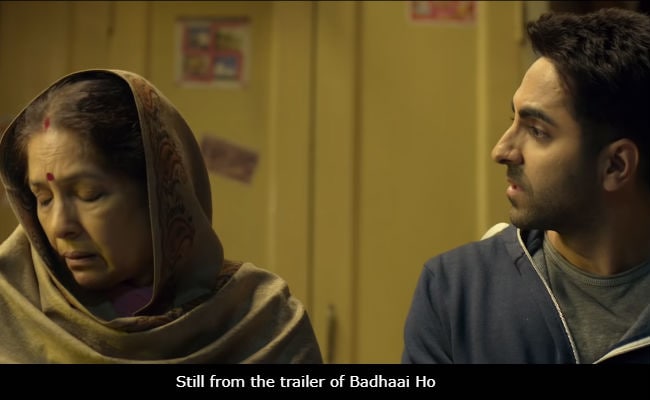 Congratulations are in order for team Badhaai Ho after the film collected Rs 7.29 crore on the opening day. Trade analyst Taran Adash shared the first day collection of the film, starring Neena Gupta, Ayushmann Khurrana and Sanya Malhotra, and said: "Badhaai Ho takes a flying start, gets the advantage of partial holiday. (It is) expected to score over the weekend." Badhaai Ho, directed by Amit Sharma (of Tevar), opened to positive reviews on Thursday, a day before Dussehra, and along with Namaste England, starring Arjun Kapoor and Parineeti Chopra.

#BadhaaiHo takes a FLYING START... Gets the advantage of partial holiday... Expected to score over the weekend... Thu 7.29 cr. India biz.

In Badhaai Ho, Neena Gupta plays the role of Priyamvada, a house-wife in her Fifties with two grown up sons. The news of her pregnancy is greeted with disdain, especially by her elder son Nakul (Ayushmann Khurrana), who intends to marry his girlfriend Renee (Sanya Malhotra). Priyamvada's late pregnancy dictates the film's plot, which is supported by actors Surekha Sikri, Shardul Rana and Shardul Rana.

In his review for NDTV, film critic Saibal Chatterjee wrote: "Badhaai Ho is a sweet little gem informed with gentle wit and infectious warmth. The slice-of-life storytelling, which is appreciably enhanced by solid performances from a wonderful cast, is marked by control and sensitivity." He also praised Neena Gupta for her performance in the film.

Speaking of her role in Badhaai Ho, Neena Gupta earlier told news agency IANS: ""Yes...it never used to happen earlier. It feels really nice to be in times where senior actors are getting meaty roles in content driven films. It's my first full-fledged role in a commercial film, which will have good release as well. So, I feel very fortunate to be part of this film."