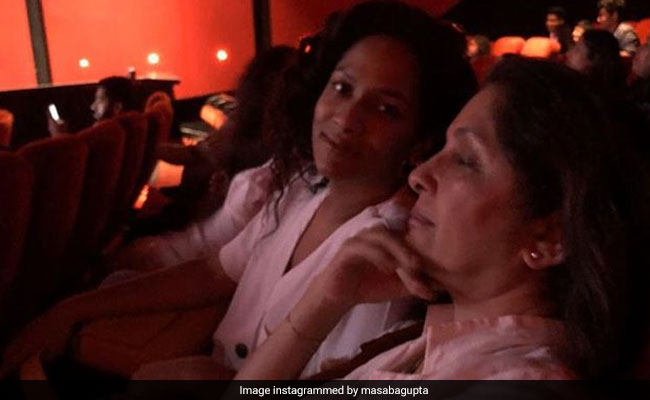 Neena Gupta's daughter Masaba Gupta recently watched Badhaai Ho, which features the actress in a pivotal role. After watching Badhaai Ho, Masaba couldn't stop raving about Neena Gupta's performance in the film and said: "Mom, to each time you questioned why you didn't get 'meatier' roles when you were younger. It's because they saved the best for your second innings and this is just the beginning." Masaba called the Amit Ravindernath Sharma-directed film the "warmest, funniest and loveliest film that everyone needs right now." Masaba shared a picture with her mother from the screening, which took place on Sunday. "There are so many great stories out there and so many great films being made but nobody can touch a film with such heartbreakingly great actors. Your heart will literally break that they are only interested in showing you the best of their craft," an excerpt from Masaba Gupta's post dedicated to her mother read. Badhaai Ho, which is making way to the theatres on Thursday (a day prior to its scheduled release date), also features Ayushmann Khurrana, Sanya Malhotra, Gajraj Rao and Surekha Sikri.

Take a look at the post shared by Masaba Gupta.

Means now where do I even start! This was just before we watched Badhaai Ho for the first time last night. Just 2-3 things to say 1.There are so many great stories out there & so many great films being made but nobody can touch a film with such heartbreakingly great actors. Your heart will literally break that they are only interested in showing you the best of their craft ! 2. Mom,to each time you questioned why you didn't get 'meatier'roles when you were younger .. it's because they saved the best for your second innings & this is just the beginning .. I'm so glad you didn't become bitter that's the most important thing. Lastly,To the director/cast & crew and everyone at Junglee films - thank you for making a film that is actually not glossy assholery at all,it is in fact the warmest,funniest,loveliest little jagged shard of glass that we all need right now. #badhaaiho comes out a day earlier now cos no one can wait. So it's the 18th of October ! Excuse my language but i am so happy.

Neena Gupta in an earlier interview to news agency IANS said that she did not read the script of Badhaai Ho and came onboard because of the interesting subject. "I did not even read the script of the film because the subject was so interesting. Female actors of our age don't get a chance to play such interesting characters. This phase of our life is not addressed only in our Hindi cinema. But I think the change is happening because of the youngsters who are writing such scripts," IANS quoted the actress as saying.

Masaba was born to Neena Gupta and Vivian Richards, former West Indies cricketer, when they were in a relationship in the Eighties. While Viv Richards is married to Miriam, Neena Gupta married chartered account Vivek Mehra in 2008.