Baarish Ban Jaana : Hina Khan and Shaheer Sheikh shot for the music video of the song in Kashmir 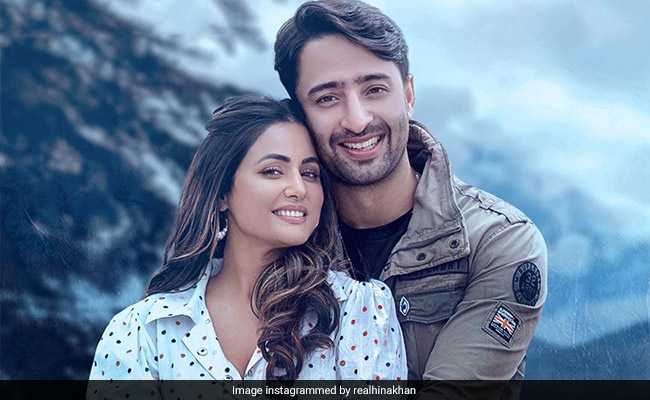 Actress Hina Khan occupied a spot on the list of trends on Saturday, after she dropped the first look poster of her upcoming music video Baarish Ban Jaana . The 33-year-old actress will feature in the music video alongside TV actor Shaheer Sheikh. Hina and Shaheer, who both hail from Kashmir, shot for the music video of the song in the valley last month. The first look poster of the song has already sent the Internet into a tizzy. It features Shaheer Sheikh warmly hugging Hina Khan, as they pose against the backdrop of snow-capped mountains of Kashmir. Sharing the first look of the song on Instagram, Hina Khan wrote: "From the makers of Baarish, comes another beautiful monsoon melody! #BaarishBanJaana releasing on 3rd June. How excited are you all?"

Fans of the actress expressed excitement towards her upcoming project and dropped comments on her post. "Gorgeous," a fan wrote complimenting Hina Khan, while most others dropped heart emojis in the comments section of the post.

Take a look at the first look of the song here:

Baarish Ban Jaana is a romantic track sung by Payal Dev and Stebin Ben. It will release on YouTube on June 3, at 11 am.

Last month, Hina Khan had dropped several pictures of herself with Shaheer Sheikh from Kashmir, as they met for the shoot of the music video. They could be seen laughing as they posed together for multiple pictures. Without revealing much, Hina Khan gave a hint to her fans that she and Shaheer Sheikh might be working on a "surprise" for them. "What's the surprise Shaheer Sheikh," she wrote in her caption.

Hina Khan has been featuring in many music videos these days. Before Baarish Ban Jaana, she was recently featured in the songs Patthar Wargi and Bedard .

Talking about Shaheer Sheikh, he is a popular face on the TV. He is best known for his work in TV shows like Mahabharat , Navya and Kuch Rang Pyaar Ke Aise Bhi.

Is Qadar: Tulsi Kumar And Darshan Raval's Song Is A Smash Hit With Over 100 Million Views