Ramadan 2021: Hina Khan Wishes Her Fans With A Plate Full Of Dates 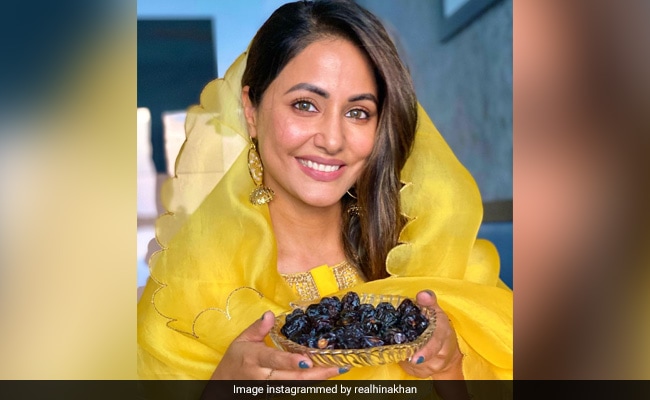 Actress Hina Khan marked the beginning of the auspicious month of Ramadan with a special Instagram post on Wednesday. The TV star shared several pictures of herself on social media to extend Ramadan wishes to her fans. In the pictures, Hina Khan can be seen all deckedn up for welcoming the festivities as she can be seen wearing a beautiful bright yellow salwar suit. She completed her look with matching earrings and a finger-ring bracelet. Going by the Indian tradition of offering sweets to celebrate festivals, the actress also offers some scrumptious looking date palms to her Instafam in some of the pictures. In some pictures, she can be simply seen doing what she does the best, posing. "Ramadan Mubarak," she wrote in the caption of the post and added a crescent moon emoji along with it.

Check out the stunning pictures of the actress here:

The 33-year-old actress' post was flooded with comments from her fans as well as friends from the entertainment industry. "Ramadan Mubarak aapko bhi Hina allah aapko hamesha khush rakhe," a fan wrote in the comments section of the post. "Ramadan Mubarak," commented TV actress and Hina Khan's friend Surbhi Jyoti.

The holy month of Ramadan began from yesterday and will continue till May 12. It is the ninth month of the Islamic calendar and is considered the most sacred month of the year. It is marked by the sighting of the crescent moon and it ends on the sighting of the next crescent moon. The holy month of Ramadan is celebrated by the followers of Islam by fasting and praying.