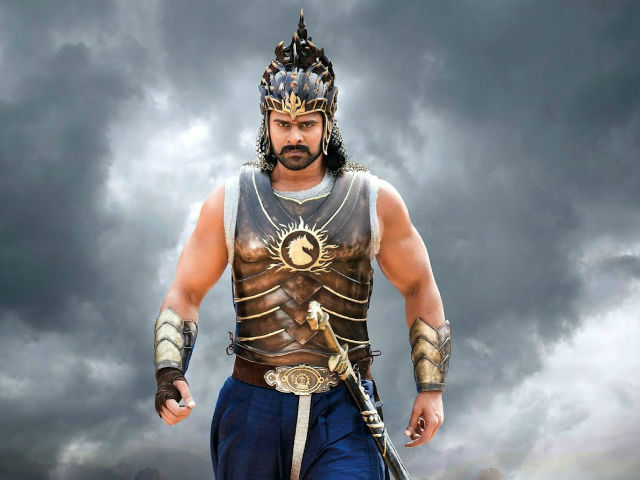 Prabhas featured as Mahendra Baahubali in Baahubali: The Beginning

New Delhi: Like the pre-release event, the Tamil music release of S S Rajamouli's upcoming film Baahubali: The Conclusion, was a star-studded affair. The launch was held at Chennai's YMCA ground on Sunday evening. Actors Prabhas, Sathyaraj, Anushka Shetty, Tamannaah Bhatia and Ramya Krishnan, were a part of the event. Rana Daggubati had to give it a miss due to work commitments but tweeted that he would join the team soon. The music was released by Tamil star Dhanush, who said that team Baahubali has set a new benchmark for themselves in the industry. "A lot of hard work has gone behind this film. They deserve everything that have been getting," news agency IANS quoted the VIP 2 actor as saying. Baahubali: The Conclusion, part 2 of Rajamouli's magnum opus, releases on April 28.

Here are some pictures from the grand event:

Hello to everyone from our team! #Baahubali2tamilaudiolaunchpic.twitter.com/U5oo0dPqlm

Prabhas, who is the star of Baahubali franchise said he could easily dedicate several years for Rajamouli's film. "For Rajamouli, I would have even spent more than four years on Baahubali. I would have been ready to dedicate even seven years for him on the project," IANS quoted Prabhas as saying at the music launch.

Of the film, he said, "It was physically strenuous, especially while working on action sequences in the first part. In the second part, Rajamouli edited the action scenes in a way that he made the whole process very easy."

Meanwhile, K K Senthil Kumar, the cinematographer of Baahubali revealed that the war sequences of the film was shot continuously for 120 days. He told iFlickz, "For the war sequences, we shot continually for 120 days with just breaks of one or two days in between. Whenever we shot outdoors, we could pack up at 6pm because light would fade after that. But the days we had to shoot indoors, the shooting would extend until late in the night. Our main priority would be to complete the scenes and on certain occasions, we have even shot for 24 hours to complete the scenes."

Ahead of its release, Baahubali: The Beginning hit the screens once again on April 7, as a part of marketing strategy. Part 2 stars Prabhas in the double role of Amrendra and Mahendra Baahubali, Rana Daggubati as Bhallala Deva and Sathyaraj has Katappa. Baahubali: The Conclusion is easily the most-anticipated films of the year, as it is expected to reveal why did Katappa kill Baahubali in first part. Anushka Shetty (Devasena), Tamannaah Bhatia (Avanthika) and Ramya Krishnan (Sivagami) reprise their roles.

Filmmaker Karan Johar's Dharma Productions is responsible for the Hindi release of Baahubali: The Conclusion.

Promoted
Listen to the latest songs, only on JioSaavn.com
Baahubali: The Conclusion will release across 6,500 screens across India in Telugu, Tamil, Malayalam and Hindi languages. The film will also hit the screens in IMAX format.