Baahubali: The Beginning Review - Fantastic Bang For Your Buck In Most Expensive Indian Movie Ever Made 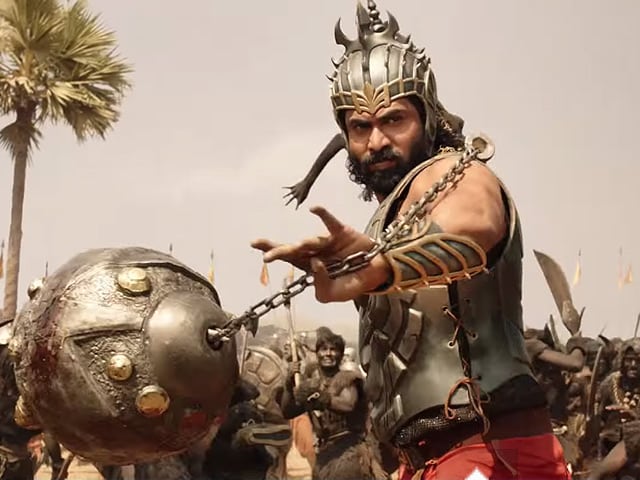 The most expensive Indian movie ever made turns out to have spent a fair bit on getting one man to the top of a cliff and then leaving him hanging. SS Rajamouli's Baahubali - a Telugu production, dubbed into Tamil and releasing in two parts (Baahubali: The Conclusion follows next year) - reportedly set its producers back around $40 million: pocket change by Hollywood standards, a sign of how the movie world's other half live. Yet for once with these lavish items, the budget isn't the whole story: the impressive results only set one to wondering why the American studios don't insist on getting more for their money.

The eponymous hero ("The One with Strong Arms") embodies several legends for the price of one. Plucked from a river, the infant Baahubali could be Moses; shifting a stone shrine several hundred feet, his teenage self is as hefty as Hercules; swinging from vines so as to climb the waterfall his village sits under, he's as romantic a figure as Tarzan.

The film, like its hero, keeps flexing its muscles; Rajamouli clearly asked "What can't we do with this cash?" You want to see a man wrestling a bull with his bare hands? You got it. Two lovers fleeing an avalanche on a rock? Check. A hero swatting 10,000 arrows using his sword alone? Why not.

New frontiers unfold before our eyes: one moment we're witnessing mildly risqué canoodling in a forest of orchids, the next prowling the streets of a fortified city where hundreds of flogged and flogging extras have been charged with erecting a towering golden statue. (Again with the Moses comparisons.) The final 45 minutes roam a vast battlefield that, with its human shields and Boadicea-style murder chariots, makes Helms Deep resemble a punch-up in a chip shop. At each turn, the money's right there on screen, yet what's most striking is how these resources have been marshalled - to enhance, rather than clutter up, the narrative throughline.

In this, Baahubali demonstrates the pleasing, straight-ahead simplicity of certain videogames: whenever our hero accomplishes a task, some new challenge presents itself. Upon scaling that waterfall, the adult Baahubali (the genial, moustachioed Prabhas) finds he's strayed into a civil war; only with a glimpse of warrior princess Avanthika (Tamannaah Bhatia) does he sense which side to pick. Their slyly feminist pairing makes some headway, yet that last-act battle forms part of an extended flashback that reveals the full extent of the dynastic tangle they've charged into. (The decision to split one epic into two films here makes narrative and economic sense: this mess will require some cleaning up.)

Throughout, Rajamouli strikes a near-perfect balance between physicality and poetics. That waterfall becomes both mirror and measure of personal growth; one lingering slo-mo shot of a warrior's chainmail in motion would stir a Zhang Yimou or Wong Kar-wai into renewed action. It's merely cute when Baahubali plunges into a lake to paint the hand the dozing Avanthika has let slip into the waters, yet the action has a lovely pay-off: this impromptu tattoo is seen to complete one on the hero's bicep during a later embrace. Unlike the committee scripting of, say, The Scorpion King, a lot of Baahubali appears to have been written in the stars.

And that's finally the film's appeal: it's a throwback, the kind of peppy serial that would have graced the multiplex in the days before product-placement, billion-dollar PR campaigns and obligation 3D, when the sole components required for a blockbuster were a hero, a villain, a few fights, a few songs, and a happy ending. Rajamouli defers on the latter for now, but his skilful choreography of these elements shucks off any cynicism one might carry into Screen 1: wide-eyed and wondrous, his film could be a blockbuster reboot, or the first blockbuster ever made, a reinvigoration of archetypes that is always entertaining, and often thrilling, to behold. Roll on 2016.