Baahubali 2 Will Be Even Better, Says Tamannaah 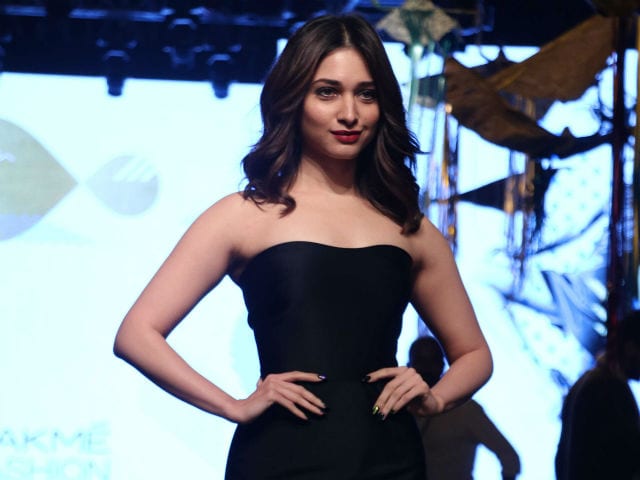 Tamannaah Bhatia on the ramp at Lakme Fashion Week

New Delhi: Actress Tamannaah Bhatia, who is a prominent face in Tamil and Telugu films, told news agency PTI that her next Bollywood project will be more performance oriented. The 27-year-old actress has been a part of four Hindi films - Himmatwala, Humshakals, Entertainment and Tutak Tutak Tutiya. Tamannaah told PTI that her previous Bollywood projects have not highlighted her acting skills so far and she will choose her next films depending on the opportunities they allow her as an actress. "I am listening to a lot of Hindi scripts now and hopefully I am going to make an announcement soon once I lock in the script. Till now whatever Hindi films I have done, my performance was not highlighted. The film that I am signing now will be more performance based," Tamannaah told PTI at Lakme Fashion Week, where she walked the ramp for designer Neeta Lulla.

The Entertainment actress is currently focusing on director SS Rajamouli's Baahubali: The Conclusion, part two of a multi-lingual fantasy. The film is a sequel to one of 2015's biggest hits, Baahubali: The Beginning and it promises to reveal the answer to why Katappa killed Baahubali in part one. The actress, who will reprise the role of the warrior Avantika, told PTI: "The film will be out in April. I am very excited about it. The first part has already garnered such a great response and piqued interest; we have got so much of love. I am looking forward to the audiences' reaction to this part."

Promoted
Listen to the latest songs, only on JioSaavn.com
Baahubali: The Beginning became the third highest grossing Indian film globally and the first South Indian film to be dubbed in Hindi which collected Rs 100 crore at the Bollywood box office. Tamannaah told PTI that the second part will do much better than the first. "It was much harder in the first time. When we did the first part we didn't have any idea how the audience would react, especially because it was a south Indian film which was dubbed in Hindi. But we got such a fantastic response. We had a better response in the north. I think the audience is waiting to watch the film. The second part is going to be better," the actress said.

Baahubali: The Conclusion also stars Prabhas, Anushka Shetty and Rana Daggubati and is slated to release on April 28. Tamannaah has also been roped in for filmmaker Rohit Shetty's next movie along with Ranveer Singh.