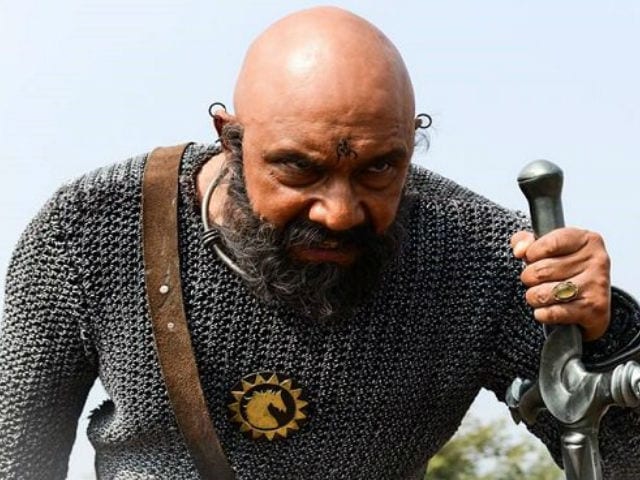 Sathyaraj in a still from Baahubali

New Delhi: Baahubali actor Sathyaraj's apology for his comments over the Cauvery row made over a decade ago, finally ended the controversy around the film's release in Karnataka. The pro-Kannada organisations have withdrawn their "protest and call for Bangalore (Bengaluru) bandh on April 28" (Baahubali: The Conclusion's release date). On Friday, Sathyaraj, who plays the role of Katappa, apologized through a video message saying: "I'm not against Kannadigas. I'm sorry if my words hurt you. I'm a small player in Baahubali, my words shouldn't affect the film." Baahubali: The Conclusion is the final chapter of director SS Rajamouli's two-part epic series.

The pro-Kannada organisations are now "satisfied with apology tendered by Sathyaraj and have warned the actor to be careful while making statements against Kannadigas and Karnataka." Vatal Nagraj, president of Kannada Chalavali Vatal, while addressing the media over the row in Bengaluru today said, "We are warning Sathyaraj to be careful about what kind of words he should use. Let him support Tamil Nadu but he shouldn't speak against Kannadigas. Ensure you don't use derogatory terms against Kannadigas henceforth. If you do so, all your future movies will be banned in Karnataka."

Other top leaders of the pro-Kannadda organisations, like Sarah Govind and Praveen Shetty, also said: "Baahubali 2 director has also apologised to us, but we don't have anything against Baahubali movie. We are not against the movie director or producer. Our grievances were against Sathyaraj." In the video Sathyaraj had said that he will continue to "support the Cauvery conflict" and that producers should think before casting him in their films. "I clearly state that even in future, I will continue to support Tamil people, Cauvery conflict and the farmer issue. I will raise my voice for it and for anything that involves welfare of Tamil people. If producers feel that in future there will be a problem in casting Sathyaraj in their film, don't cast me in those films and incur losses. Don't cast such an ordinary actor like me in future, it is my sincere request, and incur losses. More than being an actor or dying as an actor, I am very happy to live and die as Tamilian," Sathyararaj said in the video message from Chennai.


Earlier, Mr Nagaraj had called for a bandh on April 28 unless Sathyaraj issued an "unconditional apology." He told news agency PTI that they were waiting for the "right time" to stage the protest since many of the actor's films, including Baahubali: The Beginning, had released in Karnataka after Sathyaraj made the alleged controversial remarks.

Promoted
Listen to the latest songs, only on JioSaavn.com
Last week, director Rajamouli also urged the Pro-Kannada organisations to call off the protest saying: "Sathyaraj sir is not the producer or director of the film. He is one among the many artists who have worked in the film. If this movie doesn't release as planned in Karnataka, he has nothing to lose. It's unfair to target the film because of some comments he had made."