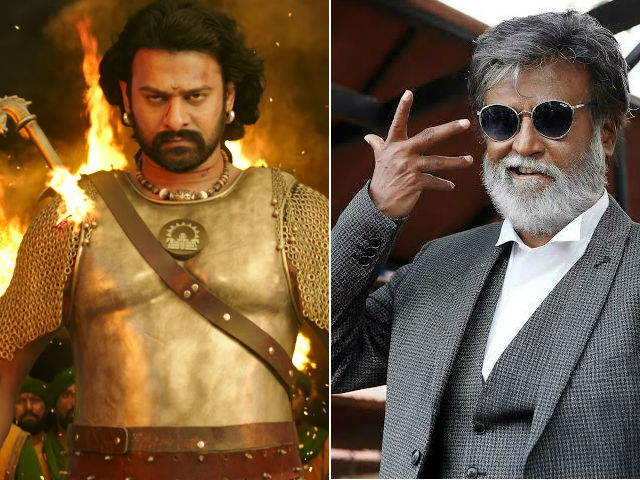 New Delhi: Superstar Rajinikanth saw S S Rajamouli's latest piece Baahubali: The Conclusion over the weekend and said that the film is 'Indian cinema's pride.' Baahubali is winning in terms box office numbers and critical acclaim ever since it released on Friday. Rajinikanth tweeted: "Baahubali 2, Indian cinema's pride. My salutes to God's own child S S Rajamouli and his team. #masterpiece." An overwhelmed Rajamouli replied: "Thalaivaaaa... Feeling like god himself blessed us... our team is on cloud9... Anything couldn't be bigger (sic)" Baahubali 2, as of now, is India's top earning film. It collected a whopping Rs 121 crore on the opening day. The Hindi version (distributed by Karan Johar's Dharma Productions) alone made above Rs 40 crore neatly displacing Aamir Khan's Dangal's opening day record. Baahubali 2 is now en route to destroy Dangal's lifetime collection record of Rs 375 crore.

THALAIVAAAA... Feeling like god himself blessed us... our team is on cloud9... Anything couldn't be bigger... https://t.co/d9xSUQRJTI

Meanwhile, Rajinikanth's 2.0 is almost ready for release and will hit the screens next year in January. The film was earlier slated for a Diwali release but the producers shifted the release date to January 25 to "achieve world class standards in VFX."

Our most ambitious project, Shankar's 2.0,shifts to 25Jan2018.It moves from earlier Diwali release to achieve world class standards in VFX.

S S Rajamouli's Baahubali 2, starring Prabhas and Rana Daggubati, has collected praises from critics, moviegoers and colleagues alike. The director on Sunday tweeted a thank you note for everyone who supported the team to bring the film to the big screen. He wrote: "It's only natural that a big project like Baahubali faces hurdles during release. I must say that the enormous love and support that was given by Baahubali fans made us cruise through the obstacles. Thank you everyone who have been with us for the past 5 years encouraging us at every turn. You have given us such a big success that we can keep it in our hearts for the rest of our lives."

Rajamouli was perhaps alluding to the controversy regarding actor Sathyaraj's (who plays the role of senapati Katappa) old comments on Cauvery row, which promoted a ban on Baahubali 2's release a week before the film was due to hit the screens. The 62-year-old actor apologized for the remarks and the debate ended there and then. Baahubali 2 tackled a minor hiccup on the day of the release too after early morning shows on Tamil Nadu were cancelled due to unresolved payment issues between the distributors and producers.

Watch the trailer of Baahubali 2:

Promoted
Listen to the latest songs, only on JioSaavn.com
Now, Baahubali 2 is running successfully in theatres, breaking one record at a time.

The Baahubali Phenomenon: How To Make A 'Pan-Indian Film'