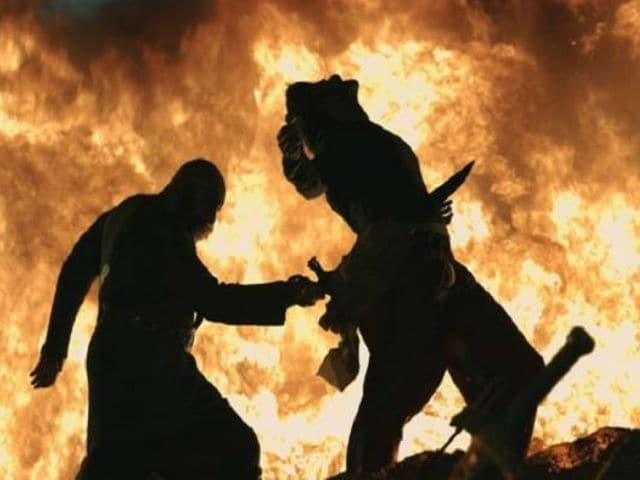 Sathyaraj and Prabhas in Baahubali: The Beginning.

New Delhi: Director SS Rajamouli shared a new poster for his upcoming film Baahubali: The Conclusion, which is probably the most special to fans of his two-part epic Baahubali. One part of the new poster shows Amarendra Baahubali's senapati Katappa raising him as a new born and the second part depicts the ultimate cliffhanger of the epic film - the moment when Katappa (played by Sathyaraj) kills Amarendra Baahubali (played by Prabhas). He shared the poster on Twitter and captioned it: "The boy he raised. The man he killed." Rajamouli also said that the film's designer "came up with this idea. Couldn't help but tweet, though unscheduled."

The first part of the epic, titled Baahubali: The Beginning released in 2015 and was an enormous hit. The film tracked the story of Shiva, who learned about his true identity - Mahendra Baahubali, son of Amarendra Baahubali - and the story of how his father, a beloved king and a revered leader, became the king of Mahishmati.

Rana Daggubati plays the role of Bhallala Deva, a great warrior, but who was always jealous of his cousin's popularity. In Baahubali: The Beginging, Bhallala Deva is shown as a tyrannical ruler. The second film will show the events which lead upto the moment of Amarendra Baahubali's murder and then a war between Mahendra Baahubali and Bhallala Deva, which Rajamouli said will be epic.

Promoted
Listen to the latest songs, only on JioSaavn.com
Actress Anushka Shetty stars as Amarendra Baahubali's wife Devasena, who was captured and tortured by Bhallala Deva after her husband's death. Tamannaah Bhatia stars as Avanthika, Mahendra Baahubali's love interest.

The trailer of Baahubali: The Conclusion will release on March 16 and the film will hit the screens on April 28.