Ayesha And Krishna Shroff's Day Was Full Of "Happy Vibes"

Ayesha Shroff gave us a glimpse of her fam-jam session 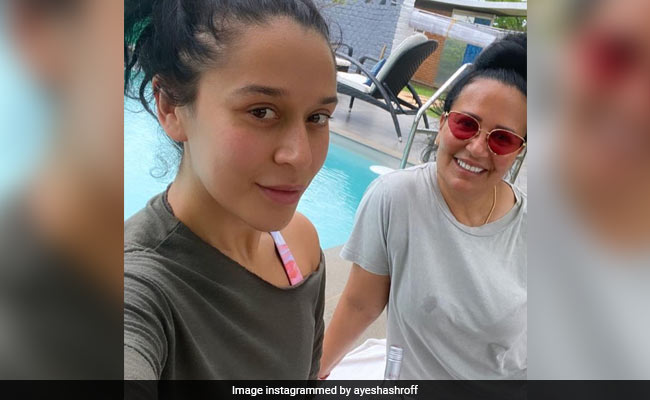 The Shroffs are busy spending quality time together. Ayesha Shroff, on Wednesday, shared several aesthetic pictures of flowers, foliage, pool and what not, on her Instagram profile. In one of the photographs, the film producer can be seen happily posing for the camera along with her daughter Krishna Shroff. In her post, Ayesha tagged her husband Jackie and their son Tiger Shroff and she wrote in the caption: "Happy vibes farm day." Disha Patani, who is said to be dating Tiger Shroff, and Eban Hyams, who is Krishna's boyfriend, dropped emojis in the comments section. "Uff! Jhappis to all," commented Siddhanth Kapoor.

Jackie Shroff and Ayesha Shroff, a former model and actress, got married in 1987. She is a producer, who has backed films like Jis Desh Mein Ganga Rehta Hai, Boom and Grahan, among others. Jackie Shroff will next be seen in Radhe: Your Most Wanted Bhai, alongside his Bharat co-stars Salman Khan and Disha Patani.

Tiger's last release was Baaghi 3, co-starring Shraddha Kapoor. Last year, Tiger starred in War, alongside Hrithik Roshan and Vaani Kapoor, which performed exceptionally well at the box office. He also starred in the 2019 film Student Of The Year 2, co-starring Ananya Panday and Tara Sutaria. The actor will next be seen in Heropanti 2.

Krishna Shroff launched her MMA training centre named MMA Matrix in November 2018. Krishna is a fitness enthusiast just like her brother and Bollywood actor Tiger Shroff, who has been trained in several forms of martial arts.