Rajamouli's impressive guest-list not only includes the Baahubali stars but South superstars such as Ram Charan, NT Rama Rao Jr and Nani 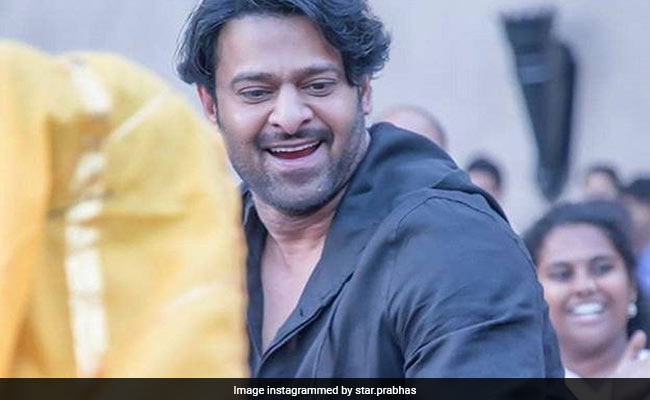 Prabhas is in Jaipur to attend the wedding festivities (courtesy star.prabh)

After Priyanka Chopra and Nick Jonas' wedding in Jodhpur, Rajasthan is star-studded again, courtesy the big fat wedding festivities of SS Rajamouli's son Karthikeya and Pooja Prasad in Jaipur. And needless to say that the Baahubali trio - Rana Daggubati, Prabhas and his rumoured girlfriend Anushka Shetty - are part of the functions, which are being held at Fairmont Jaipur. Rajamouli's impressive guest-list not only includes the Baahubali stars but South superstars such as Ram Charan, NT Rama Rao Jr and Nani are also attending the pre-wedding celebrations. Inside videos and photos from what appears to be a glitzy sangeet ceremony have been shared by Prabhas' fan clubs recently, in which he can be seen setting the dance floor on fire.

In videos on social media, Rana Daggubati and Ram Charan can also be seen joining Karthikeya and Pooja on stage while Rajamouli and his wife Rama were also part of an adorable performance, starring friends and family members.

Here's how much fun Rajamouli's guests had during the pre-wedding functions:

Prabhas and Anushka Shetty, who often feature in gossip columns in reports about a speculated romance, appeared to check in to the plush Jaipur resort together over the weekend. While they were greeted with band baaja baarat, enthu-cutlet Rana Daggubati was spotted hijacking the dhol and making the baraatis dance to his tunes.

Here are more photos from inside Karthikeya and Pooja Prasad's wedding festivites:

A post shared by Upasana Kamineni Konidela (@upasanakaminenikonidela) on Dec 29, 2018 at 7:56pm PST

Meanwhile, we also spotted Sushmita Sen enjoying at Karthikeya's wedding festivities, who is stationed in Jaipur with her family and boyfriend Rohman Shawl. "Portrait of an ever growing family," Sushmita captioned a photo while her brother Rajeev added: "Mom with her Baahubalis," for a photo with Prabhas.