Koffee With Karan 6: Rajamouli Says If Prabhas, Rana Daggubati's Baahubali Was Made In Hindi, The Cast Would Be...

SS Rajamouli was asked if Baahubali was made in Hindi, which actors would be cast in the film series 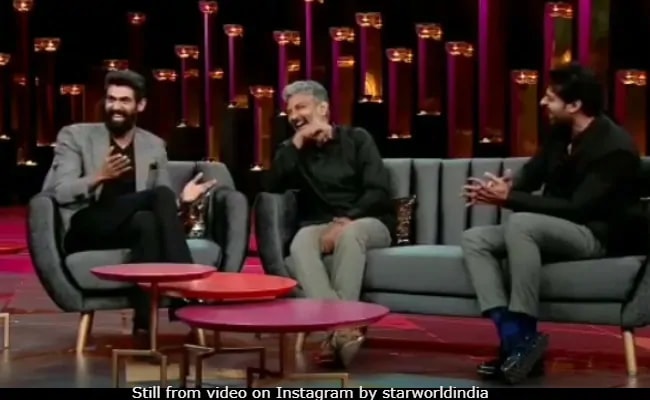 Trust us when we say this, there was never a dull moment on the Koffee With Karan 6 episode featuring the Baahubali trio - director SS Rajamouli and actors Prabhas and Rana Daggubati. Needless to say that Rajamouli's ambitious epic film series Baahubali remained a recurrent topic of conversation with the show host Karan Johar asking his guests to share their experience of working on the magnum opus project. "It's like all of us went to a film school for four years," said Rana, who was cast at the villainous Bhallala Deva in the films. Prabhas, who appeared to be the shy one amongst the trio, added: "We had three-four birthdays on sets!" The Baahubali films were made over a period of five years.

Prabhas also added that on the day of Baahubali: The Beginning's release in 2015, he was so tensed that he asked his friends to call and wake him up early only if it received a blockbuster response. "Nobody woke me up," added Prabhas. He was in New Delhi at that point to attend an event but he said he called up Rajamouli and said: "I can't come, I am too tensed." Baahubali: The Conclusion redefined box office history with as many as over Rs 1,500 crore at the box office. Rajamouli added that: "I was terrified," ahead of the first film's release over three years ago.

Now, cut to the Rapid Fire Round in the show, when Rajamouli was asked which actors he would cast if Baahubali was made in Hindi. After giving it a thought, Rajamouli said Deepika Padukone would have been best suited for the role of Devasena (originally played by Anushka Shetty) while he simply could not think of replacements for Prabhas (who played the titular role) and Rana. Earlier, both Prabhas and Rana had named Deepika as their favourite actress from Bollywood. Prabhas and Rana were also individually asked to name probable alternative actors for each other's Baahubali roles when they made it clear that only a Prabhas can be a Baahubali and a Rana can be a Bhallala Deva.

Meanwhile on the show, we also learnt that Anushka's real name is actually Sweety Shetty and that Anushka is her stage name, that Prabhas loves to host massive parties at his plush farmhouse in Hyderabad and that he is a complete foodie. Rajamouli also revealed Prabhas is the "bad boy" amongst the two actors but nobody's ever likely to know about what he's up to. The filmmaker termed Rana as the extrovert and Prabhas as the introvert.

For the first time on television, the superstars from the South grace the Koffee couch! In conversation with @ssrajamouli, @ranadaggubati, and #Prabhas next Sunday on #KoffeeWithKaran. #KoffeeWithTeamBaahubali #Baahubali #Prabhas #Rana

Karan Johar also asked Rana Daggubati about his rapport with rumoured ex-girlfriend Trisha Krishnan, when he said: "We were just good friends." Later, he added that: "We've been friends for very long but things didn't work out." Prabhas was also asked about the dating rumours about him and Anushka Shetty, which he dismissed.

Who do you think will get married first? #KoffeeWithKaran #KoffeeWithTeamBaahubali

Meanwhile, the Koffee hamper was taken home by Rajamouli because of his to-the-point and honest answers. Prabhas and Rana Daggubati could not defeat Rajamouli even in the Gaming Round as nobody received their calls to say: "Hello Karan, it's me!"

The show ended with a glimpse of the next episode, in which Rhea, Sonam and Harshvardhan Kapoor would be on the koffee couch. Watch this space for more updates on Koffee With Karan.