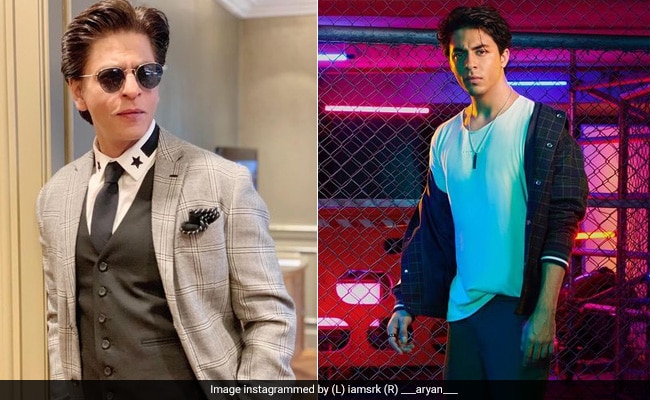 Shah Rukh Khan's son Aryan Khan rarely shares a post on Instagram, but when he does, he makes it count. Speaking of which, Aryan recently shared a few pictures from a photo shoot on Tuesday. In the images, he looks uber cool in casual outfits. However, what grabbed our attention was Shah Rukh and Aryan's Insta exchange. Soon after Aryan shared the post, Shah Rukh commented, "Looking really good!!...and as they say, that whatever is silent in the father....speaks in the son." He also asked, "By the way is that grey t-shirt mine!!!" To this, Aryan dropped an epic reply, tagging his father in the comment section, he wrote, "Your genes and t-shirt haha". In the last image, Aryan is wearing a grey t-shirt paired with black track pants and a yellow jacket. 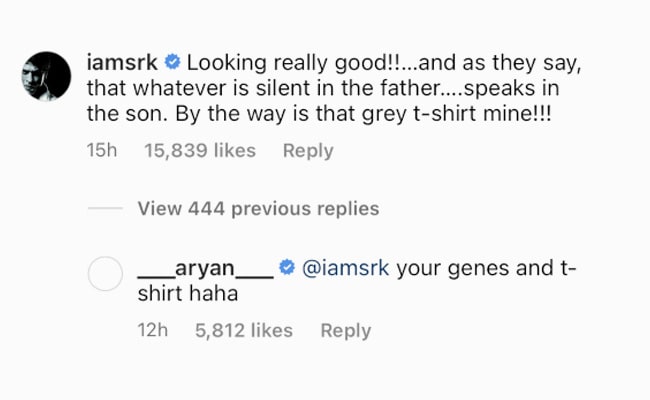 Gauri Khan has also shared a picture of her son Aryan on Twitter and captioned it as, "Onwards and upwards... my boy". Drawing a comparison between himself and his son Aryan, Shah Rukh Khan a picture of himself from his movie Main Hoon Na and wrote, "Mujh par gaya hai....my boy!"

In August, Aryan Khan dropped his first Instagram post after a year. He shared pictures with his siblings Suhana and AbRam Khan and captioned the post as "Hat-trick". Soon after he shared the post, Suhana commented, "Thanks for the crop". His father Shah Rukh Khan wrote, "Why I don't have these pictures!!!!!! Give them to me NOW!". To this, Aryan replied, "I'll send them to you the next time I post...so probably in a few years haha."

In terms of work, Shah Rukh Khan was recently seen in Brahmastra in a cameo appearance. He has several films in his kitty - Pathaan with Deepika Padukone and John Abraham and Jawan with Nayanthara.