“What an awesome-looking trophy," wrote Aryan 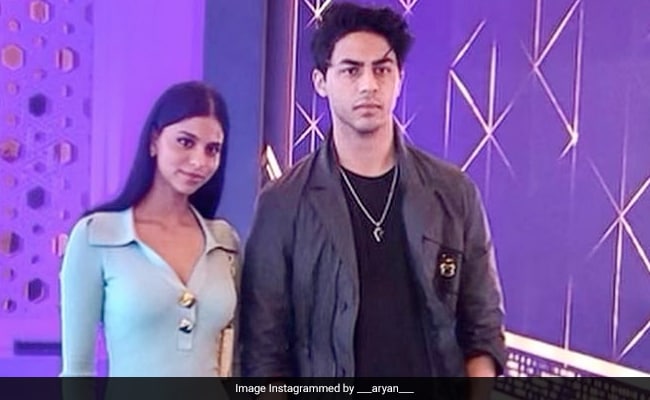 Shah Rukh Khan and Gauri Khan's children, Aryan and Suhana, were in Dubai for the trophy unveil event of UAE's International League T20. The actor's Knight Riders Group, which is co-owned by Juhi Chawla and her husband Jay Mehta, bought the Abu Dhabi franchise and set up Abu Dhabi Knight Riders (ADKR) earlier this year. Now, Aryan has shared pictures from the event on Instagram. The opening slide features Aryan posing alongside Jay Mehta and KKR CEO Venky Mysore with the magnificent trophy. The next slide shows Aryan and Suhana happily posing for the lens. He looks dapper in a black tee, matching jeans and a grey jacket. Suhana Khan looks chic in a pastel blue bodycon dress.

The inaugural season of the International League T20 will be played between January 6 to February 12, next year. At the event on Monday evening in Dubai, Sheikh Nahayan Mabarak Al Nahayan, Minister of Tolerance and Coexistence and Chairman, Emirates Cricket Board, unveiled the trophy in the presence of other stakeholders.  The other teams of ILT20 are – Desert Vipers, Dubai Capitals, Gulf Giants, MI Emirates and Sharjah Warriors.

The official page of Abu Dhabi Knight Riders also tweeted a dashing photo of Aryan Khan from the International League T20 event. “Can't decide what to keep our eyes on. The foreground or the background,” read the caption and we must say, we couldn't agree more.

Can't decide what to keep our eyes on! ????
The foreground or the background ????#AryanKhan#ADKR#AbuDhabiKnightRiderspic.twitter.com/ba00BenAnT

After the function, Suhana Khan flew back to Mumbai. She was spotted at the airport in the same blue bodycon dress.

Earlier this year, Aryan Khan was pictured with Suhana Khan at the KKR table during the pre-IPL auction meeting and then again, at the mega auction.