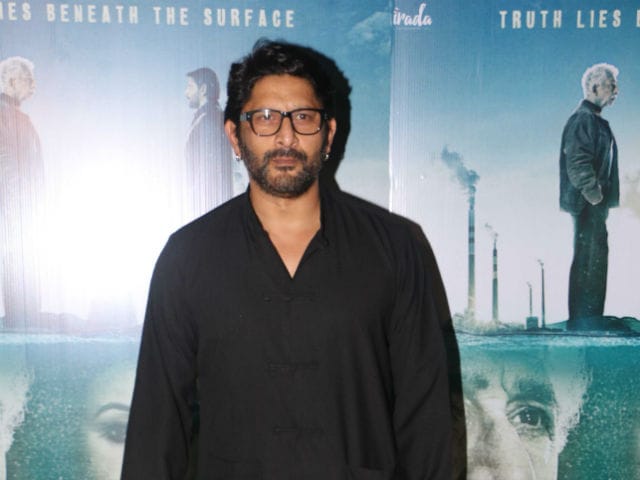 Arshad Warsi at the screening of his film Irada

New Delhi: Arshad Warsi, whose film Irada released on February 17, is excited about Sanjay Dutt's comeback to the big screen. Arshad Warsi, who has co-starred with the 57-year-old actor in the Munna Bhai series, wished him luck for his upcoming film Bhoomi. The actor told news agency IANS: "Sanjay Dutt is meant to be for the big screen. That's what Sanju is. I am very happy for him and I hope that film does really well. People love him as they always have loved." After super-hit films - Munna Bhai M.B.B.S. (2003) and Lage Raho Munna Bhai (2006), director Rajkumar Hirani is set to release the third instalment of the series, titled Munna Bhai Chale America, in 2018.

Sanjay Dutt is making a comeback to the silver screen with Bhoomi. The film has been directed by Omung Kumar and is being produced by T-Series and Legend Studios. Bhoomi revolves around the relationship between a father and daughter. Aditi Rao Hydari will be seen portraying the role of Sanjay Dutt's onscreen daughter. The film is currently being shot in Agra.

Promoted
Listen to the latest songs, only on JioSaavn.com
Arshad Warsi also spoke about his recent film Irada, directed by Aparnaa Singh. The film features Divya Dutta, Naseeruddin Shah, Sagarika Ghatge, Sharad Kelkar, and Nikhil Pandey in lead roles. Arshad Warsi, who has previously worked with Naseeruddin Shah in films like- Ishqiya and Dedh Ishqiya, told IANS: "Naseer saab and I have become good friends now. He is an amazing person and a brilliant actor. Therefore, whenever I work with him, it is a great experience for me. Though Naseer saab and I are poles apart, but still we have a connection. I enjoy working with him."