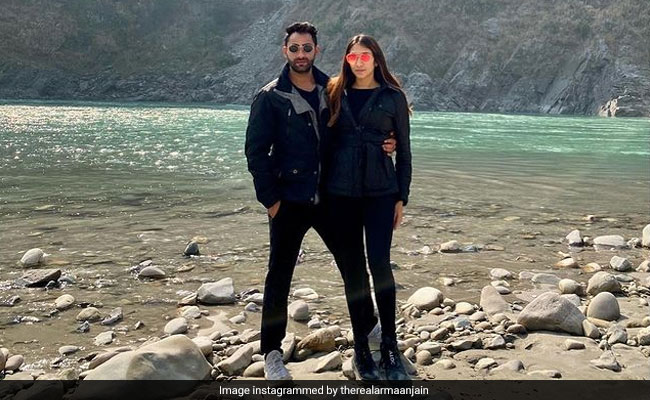 Armaan Jain and Anissa Malhotra celebrate their first wedding anniversary today. The couple had a lavish wedding in Mumbai on February 3 last year. Well, the actor and his wife are currently making memories in Rishikesh, Uttarakhand. On Tuesday, Armaan Jain, cousin of Kareena Kapoor, Karisma Kapoor and Ranbir Kapoor, posted a set of photographs of himself and wife Anissa chilling in the greenery of Rishikesh. In one photo, the duo can be seen twinning in maroon outfits while in another, their swag is off the charts in black attires. Sharing the pictures, Armaan Jain didn't write anything and just accompanied his post with monkey, coffee and sunglasses icons.

Armaan Jain and Anissa Malhotra's wedding reception was a star-studded event. From Amitabh Bachchan to Shah Rukh Khan to Rekha, many celebs gave the couple their blessings at the reception.

A video of Kareena, Karisma Kapoor, filmmaker Karan Johar and actress Tara Sutaria, who is dating Armaan's brother Aadar, dancing with Armaan and Anissa to the track Badri Ki Dulhania also trended for days after the reception.

In terms of work, Armaan Jain made his debut in Bollywood with Arif Ali's 2014 film Lekar Hum Deewana Dil, in which he co-starred with Deeksha Seth. The film failed to fare well at the box office. Armaan Jain hasn't announced his next project yet. He recently launched a new venture - Kitchen Tales, a vegetarian delivery kitchen.