Arjun Rampal Sends A Family Postcard. Arik Steals The Show In The Pic

Arjun Rampal is seen posing with her beautiful daughters Mahikaa and Myra, along with girlfriend Gabriella Demetriades and their son Arik 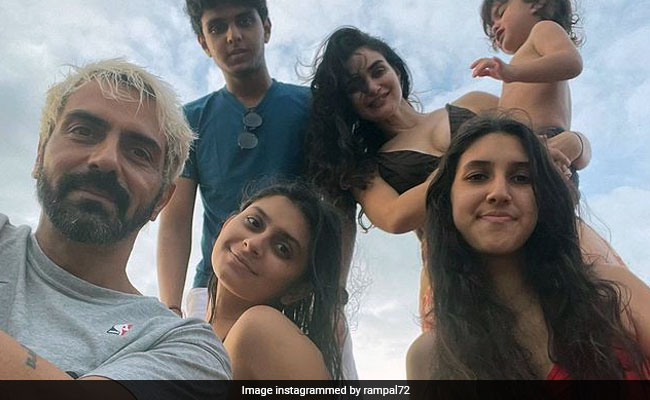 Arjun Rampal is a complete family man. How do we know this, you ask? Well, it's simple. Just scroll through the actor's social media timeline. It will reveal to you all that he holds dear to him and his family is certainly at the top of the list. And now, Arjun Rampal has shared two pictures on his Instagram timeline. In one he is surrounded by his beautiful daughters Mahikaa Rampal and Myra Rampal. And a second photo also features Arjun Rampal's girlfriend and model Gabriella Demetriades holding the couple's son Arik along with Arjun and his two daughters. In the caption shared next to the pictures Arjun Rampal wrote, “Time well spent.” He also posted a red heart emoticon along with the caption.

Arjun Rampal is a doting daddy who often posts pictures featuring his three children. Recently, Arjun Rampal shared a carousel of candid pictures with his three-year-old son Arik. In the pictures, Arjun Rampal can be seen hugging and kissing the adorable munchkin and also showing the little toddler something interesting. Arjun Rampal captioned the picture, “Pyaar (Love)” along with a red heart emoticon and an in-love emoji.

Arjun Rampal ensures he spends enough time with his grown-up daughters Mahikaa and Myra. Take a look at this sweet picture he shared posing with Mahikaa. It will warm your heart for sure. Arjun's “bond” with his daughters is undeniably strong and this picture is proof. Arjun Rampal wrote to Mahikaa in the caption, “The bond. My baby girl jaan. Love you beyond.”

Not only does Arjun Rampal spend time with his kids but he also spends time with his daughters' friends. Such a cool dad, don't you agree? Arjun's daughter Mahikaa Rampal is currently pursuing a degree in film at the Met Film School in London. Arjun Rampal shared pictures of himself posing with Mahikaa and her friends when he visited her at her campus in Ealing. In the caption, he wrote, “Daddy's day out. Had a wonderful day with Mahikaa and some of her classmates, had discussions with great introspection, with these young aspiring filmmakers/ actors who gave me a tour of their very special campus in Ealing. Looking forward to our Hyde park run.”

Arjun Rampal will next be seen essaying the role of an antagonist in the upcoming movie Dhaakad. The film stars actress Kangana Ranaut. Arjun Rampal was last seen in the web series Nail Polish where he played the role of a criminal lawyer.

Inside Pics From Kartik Aaryan's Birthday Party With Ananya Panday, Vaani Kapoor And Others