Arjun Kapoor will be next seen in Namaste England 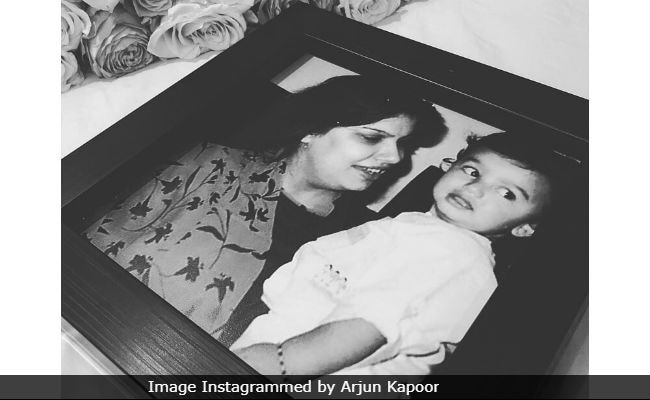 New Delhi: Actor Arjun Kapoor, who is currently shooting for his upcoming film Namaste England in London, shared a million dollar throwback picture of his late mother Mona Shourie on Instagram. The actor's post is a photo frame, in which little Arjun is perched in his mother's arm. (The photo frame was gifted to him). "I will always remember this. I'm so deeply touched. Thank you for sharing this with me and allowing me into your world. Lots of love," he captioned the post. Arjun's family members like Sanjay Kapoor, Maheep and Sunita Kapoor have liked his post, along with his colleagues like Ranveer Singh and Abhishek Bachchan. "Precious" and "remember she is an angel watching over you" are some of the comments posted on the picture.

I will always remember this @Raekhan05. I'm so deeply touched. Thank you for sharing this with me and allowing me into your world...Lots and lots of love to you.

Promoted
Listen to the latest songs, only on JioSaavn.com
On her sixth death anniversary (March 25 ), Arjun shared a heartfelt note for his mother. "I can't believe it's been 6 years to the day but I still think of you in every breath that I take," read an excerpt from Arjun's post.

As I was shooting by a canal today in Patiala wishing I could send u a picture of how nice the location was Mom I realised I never quite got to walk the red carpet with u to show u one of my films but I'm certain in the last 6 years u have walked every step of the way with me thru these 9 films Along with mine & Anshula s personal journeys...wish u were here Mom so much has transpired so much where I would have looked at u for answers and looked at u to draw strength...I don't know if I'm doing a decent job at it but I'm taking one day at a time and making each moment count trying to be a truthful reflection of u n ur teachings...can't believe it's been 6 years to the day but I have thought of u every breath I have taken pls smile spread ur warmth n positivity wherever u are cause god knows the world me and Anshula need it...love u forever and beyond...