The Latest Wedding Rumour About Deepika Padukone And Ranveer Singh 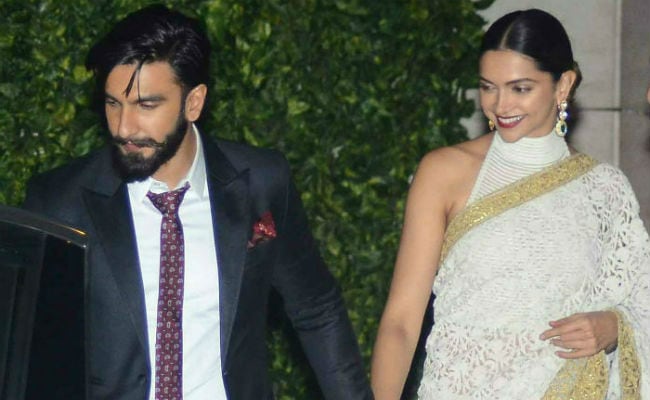 Deepika Padukone and Ranveer Singh at a party in Mumbai

New Delhi: A new rumour about their wedding put Deepika Padukone and Ranveer Singh on Thursday's trends list. As per latest intel, Deepika and Ranveer are gearing up for a winter wedding. A report in SpotboyE stated that the Ram Leela co-stars are getting married on November 19 while their pre-wedding ceremonies will begin a day in advance. This development comes after SoptboyE's last report, which stated that the Padukones and Bhavnanis may opt for a July wedding. The rumours of Deepika and Ranveer's wedding have trended on again and off again from the beginning of 2018. Even though, Ranveer Singh dismissed the reports in April, fans of the actor couple are celebrating on social media:

In April, Ranveer Singh dismissed the reports of an impending wedding saying: "Nothing is official till it is made official and I am not a seer." The actor added that they are both busy and Deepika is also 'recuperating from back problems.' BollywoodLife quoted Ranveer as saying: "So we are quite occupied and distracted. So, if there is any announcement in the future, you will be hearing me shouting from the rooftops."

Ranveer Singh has several projects on hand - Rohit Shetty's Simmba, releasing later this year, Zoya Akhtar's Gully Boy set for February 2019 release and Kabir Khan's '89, the release date of which hasn't been announced yet. Meanwhile, Deepika Padukone was last seen in Sanjay Leela Bhansali's "Padmaavat" (also starring Ranveer Singh) hasn't signed her next project yet. Her film with Irrfan Khan (to be directed by Vishal Bhardwaj) has been put on hold till Irrfan returns after his treatment for neuroendocrine tumour.

According to SpotboyE, Deepika is using her free time to complete the wedding planning and shopping. Deepika spotted in Bengaluru a few weeks ago apparently shopping for her jewellery among other things.

Promoted
Listen to the latest songs, only on JioSaavn.com
The Padukones and the Bhavnanis celebrated New Years and Deepika's 32nd birthday in Maldives toghether. It was reported that Ranveer's mother gifted a Sabyasachi saree and a set to Deepika on her birthday.

2018 started with the big fat Bollywood wedding of Sonam Kapoor and Anand Ahuja, which was followed by the hush hush wedding of Neha Dhupia and Angad Bedi.
Comments
ranveer singhdeepika padukoneranveer deepika