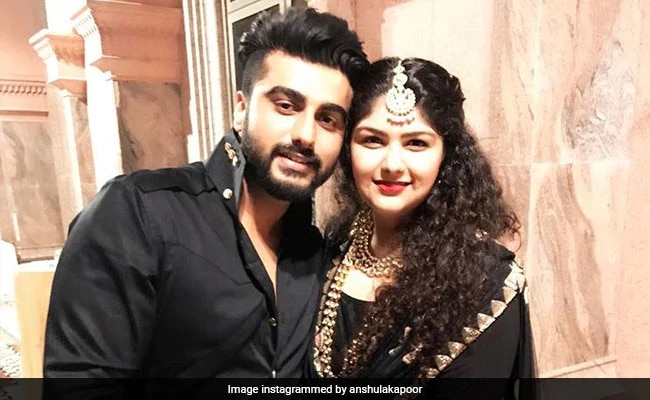 Arjun Kapoor shared a super cute throwback picture along with his little sister Anshula Kapoor on his Instagram profile. In the adorable photograph, little Anshula can be seen sitting pretty in Arjun's lap. The actor captioned the post: "Isolating together since 1990. (Yes, that's a car painted on my cupboard just don't ask why)." He accompanied the posts with the hashtags #selfisolation #quarantineandchill and #partnerincrime. Arjun's uncle (Boney Kapoor's brother) Sanjay Kapoor wrote in the comments section: "That's because you loved cars even your bed was a car."

Isolating Together since 1990. @anshulakapoor (Yes, that's a car painted on my cupboard just don't ask why) #selfisolation #quarantineandchill #partnerincrime

Last week, Arjun posted a throwback picture from his childhood days, which also featured his mother Mona Shourie and sister Anshula. An excerpt from his post read, "I wish I could be at home like this today. I would have felt safe and maybe even smiled more than anyone has ever seen me smile. It's been 8 years today since you left us Mom. The world has come to a standstill now but mine and Anshula's world was shattered when u left. Right now in this moment, I wish I had you at home."

I wish I could be at home like this today would have felt safe & maybe even smiled more than anyone has ever seen me smile. It's been 8 years today since you left us Mom... the world has come to a standstill now but mine & @anshulakapoor s world was shattered when u left forget standing still.... we have tried to pick up the pieces some days are tougher than others though... I've managed to survive 8 years of being an actor & a working individual she's also started her own business with @fankindofficial !!! Anshula more or less runs the house and I run to her if I need something in the house or in life... the world has changed Maa right now in this moment I wish I had you at home would have spent so much time with u that I couldn't when I was trying to lose weight do my acting classes and when I was away shooting ishaqzaade during ur chemotherapy... would have tried to make up for the nonstop sprinting that I would have been upto and maybe taken u for granted... I love u Maa I miss u Maa... I miss having ur name show up on my phone to check up on me... I just hope wherever you are you are happy and watching over ur 2 brats

On the work front, Arjun Kapoor was last seen in the period drama Panipat, co-starring Kriti Sanon and Sanjay Dutt. The actor will next be seen in Sandeep Aur Pinky Faraar, opposite Parineeti Chopra.