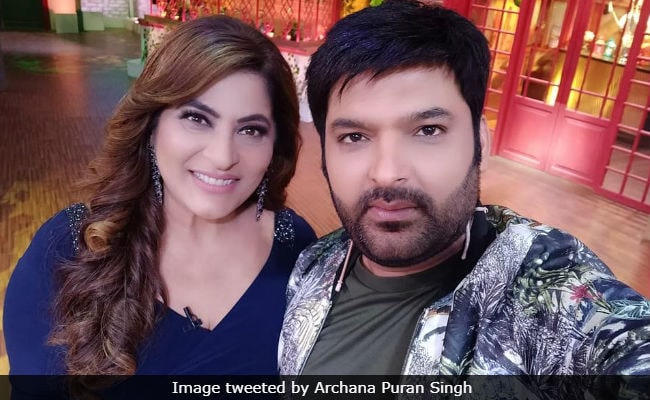 Archana Puran Singh and Kapil Sharma on the sets of the show. (Image courtesy: Twitter)

Archana Puran Singh said that it is "possible" that she may have permanently replaced Navjot Singh Sidhu on The Kapil Sharma Show, reports news agency IANS. On Thursday, Archana posted a selfie she took with frontman Kapil Sharma and captioned it, "To celebrate old associations and new beginnings." When asked about her appointment as the show's permanent celebrity guest, she told IANS: "Nothing is confirmed. It is a possibility." Last week, Twitter demanded Navjot Singh Sidhu be sacked from The Kapil Sharma Show for his remark on the Pulwama attack, in which over 40 CRPF soldiers died after a suicide bomber drove up an explosives-laden car to a security convoy.

As per an IANS source, Archana Puran Singh has been roped in to shoot more episodes of the comedy show in the upcoming days. Speaking about this, the 56-year-old actress said that the showrunners will have the final say. "I think the Sony Entertainment Television people will be able to answer to that. I am not sure if I will be shooting this weekend or not," she said.

On the set tonight with Kapil... great shoot with the king of comedy @KapilSharmaK9
Took a selfie break to celebrate old associations and new beginnings ! @SonyTV#KapilSharmaShow#shooting#actorslifepic.twitter.com/tWPBuOSPzn

In 2017, during the previous season of The Kapil Sharma Show, Archana Puran Singh filled in for Navjot Singh Sidhu when the latter was unwell.

Following the terror attack, Navjot Singh Sidhu said during a media interaction: "For a handful of people, can you blame the entire nation and can you blame an individual?" PTI reported. The cricketer-turned-politician was called out for his statement and hashtags such as #BoycottSidhu #BoycottKapilSharmaShow and #BoycottSonyTV trended for days.

Meanwhile, Kapil Sharma reportedly said at an event that sacking Navjot Singh Sidhu is "not the solution" after which Twitter demanded Kapil Sharma's show be boycotted.