Arbaaz and Nawazuddin on Freaky Ali, Salman and the Paparazzi 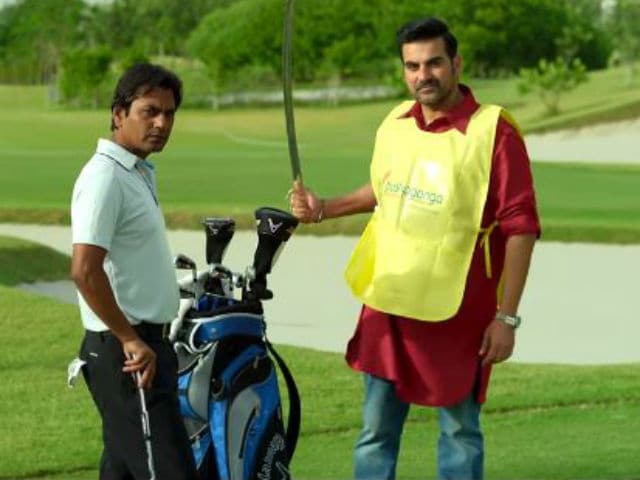 Nawazuddin Siddiqui, Arbaaz Khan in a still from Freaky Ali

New Delhi: After scaring the audience in Raman Raghav 2.0, actor Nawazuddin Siddiqui says he only wants to do romantic films. The actor, who is quite into the swing of things with Freaky Ali, says he enjoyed the song and dance routines and would not mind doing a romantic genre with a few songs thrown in.

But he admits he is quite freaky. After all, didn't he continue with his junoon for films despite the struggle? But modest about his success, Nawazuddin said he doesn't get swayed and if the day comes when he has no film offers, he will be more than happy to get back to doing theatre and street plays.

From the golf club to Manto's pen (he will be playing the titular role in Nandita Das' Indo-French co-production Manto), the actor said that's a challenge he is looking forward to since he will only be able to express Manto through what he has read of him.

On the other hand, co-star Arbaaz Khan cleared the air regarding Dabangg 3. "I need six months to prep, work on the script. I cannot take this franchise lightly. But it's definitely on the cards," Arbaaz said.

And is Sonakshi Sinha in? "She would be but there would be another actress too," the actor said.

We were also keen to know if actor Salman Khan has any plans to direct ever.

"Not likely," said Arbaaz. "Salman is enjoying his acting. Doubt he will have the time off to focus on anything else but that," he added.

Promoted
Listen to the latest songs, only on JioSaavn.com
And last but the least we talked about the growing paparazzi culture. Arbaaz admitted that it is a losing battle for Bollywood. The flashbulbs cannot be avoided nor the invasion into your privacy, he said.

Freaky Ali will hit the screens on September 9, along with Baar Baar Dekho, and the team is hopeful it will be a freaky Friday at the box office.

Shraddha Kapoor's Maldives Pic Is Breakfast For The Wanderer Soul