Anushka Sharma, Is That You In Virat Kohli's Lovestruck Pic? The Internet's Smitten

Virat Kohli's recent picture has left the Internet smitten. It features a man and a woman hugging each other 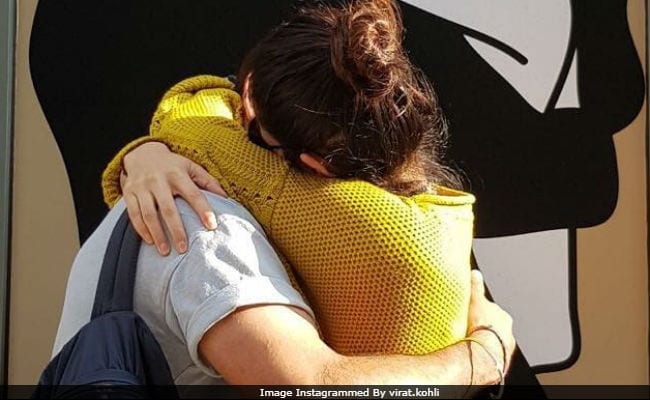 New Delhi: Cricketer Virat Kohli's recent Instagram post has left the Internet smitten. It features a man and a woman hugging each other against an adorable background. "My one and only," Virat has captioned the post, adding heart emoticons. Virat and Anushka, is that you both? (Their faces aren't visible in the picture). Virat Kohli is married to actress Anushka Sharma. The duo married last December at a Tuscan resort in Italy. Virat hasn't tagged Anushka in the picture. His post has attracted comments such as, "Wow, Virat and Anushka," "this is so cute" and "You guys give major couple goals." The picture, shared just half an hour ago, is now viral with more than 1.95 lakh likes and counting. Virat Kohli is currently in South Africa for a cricket series and Team India will play the second T20I in Centurion on Wednesday.

My one and only!

Anushka accompanied Virat to South Africa for the series and returned to India earlier in January after spending the New Year.

Promoted
Listen to the latest songs, only on JioSaavn.com
Anushka and Virat, both 29, married on December 11. The ceremony, held at a Tuscan resort, was attended by only family members and close friends. Festivities also included a ring ceremony and mehendi. The couple hosted two wedding receptions in New Delhi and Mumbai, respectively.

Anushka Sharma is currently awaiting the release of Pari, which hits the screens on March 2 (Holi). The horror drama is her first release of the year. She also has Sui Dhaaga (with Varun Dhawan), Zero (with Shah Rukh Khan and Katrina Kaif) and Dutt biopic lined-up.