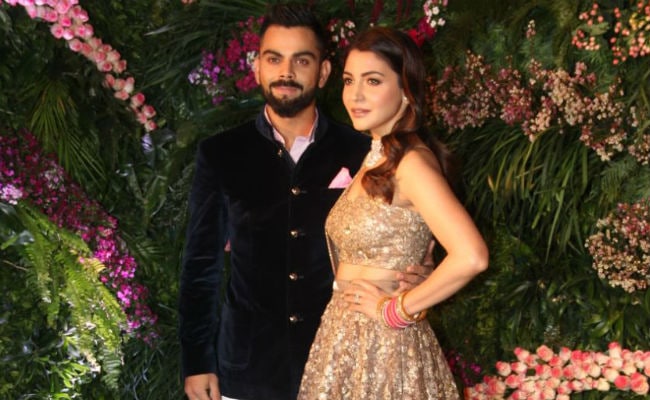 New Delhi: Anushka Sharma and Virat Kohli hosted their final wedding function - the much awaited reception at Mumbai's St. Regis - on Tuesday night. Virushka's Mumbai reception had an impressive line-up of guests and was attended by the bigwigs of the cricket world as well as Bollywood A-listers. From the Bachchans, Shah Rukh Khan and Priyanka Chopra to Kangana Ranaut and Katrina Kaif, all were there. Soon after guests started arriving, Virat and Anushka made a stunning appearance in Sabyasachi and Raghavendra Rathore outfits and sent the paparazzi in a tizzy. Anushka looked resplendent in a sequinned smokey grey lehenga while Virat complimented her in an indigo velvet bandhgala and silk pants. Anushka accessorised with exclusive hand-crafted jewellery, also designed by Sabyasachi - a brilliant neck-piece with rose cut diamonds, solitaires, briolettes and Japanese baroque pearls to go with one-piece stud earrings. Virat's accessories included hand crafted vintage gold buttons.

Here are Anushka and Virat at the photo-op counter:

The lavish Mumbai reception is the second part of the post wedding festivities after Virushka had a big fat Punjabi reception in New Delhi's Taj Diplomatic Enclave last week. The actress and the cricketer had a fairytale wedding in a faraway destination - they married at a heritage resort in the Italian countryside of Tuscany on December 11 with just close friends and family in tow. But the one in Mumbai was primarily for Anushka's friends and colleagues. 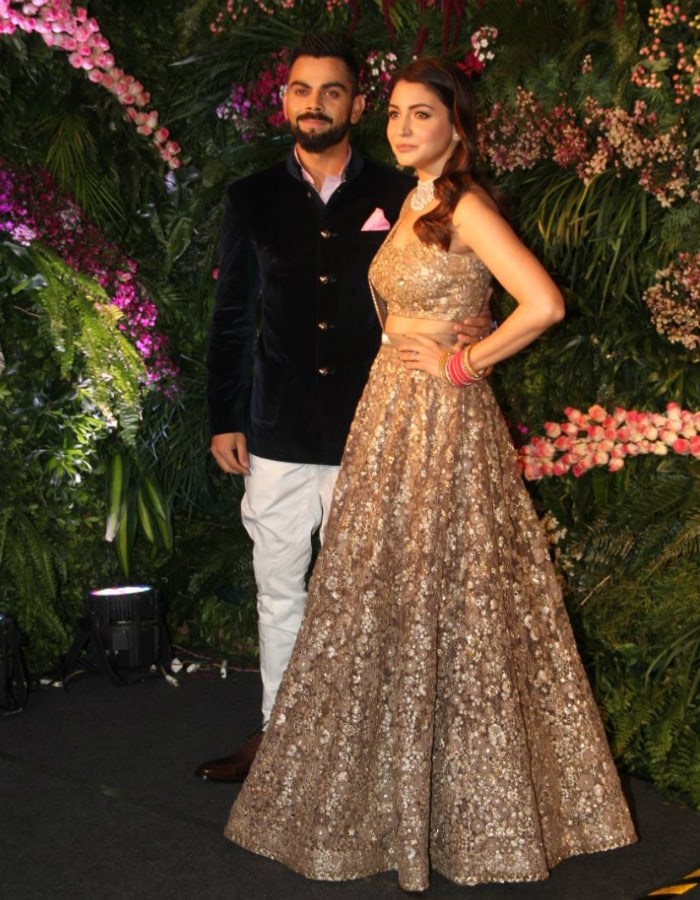 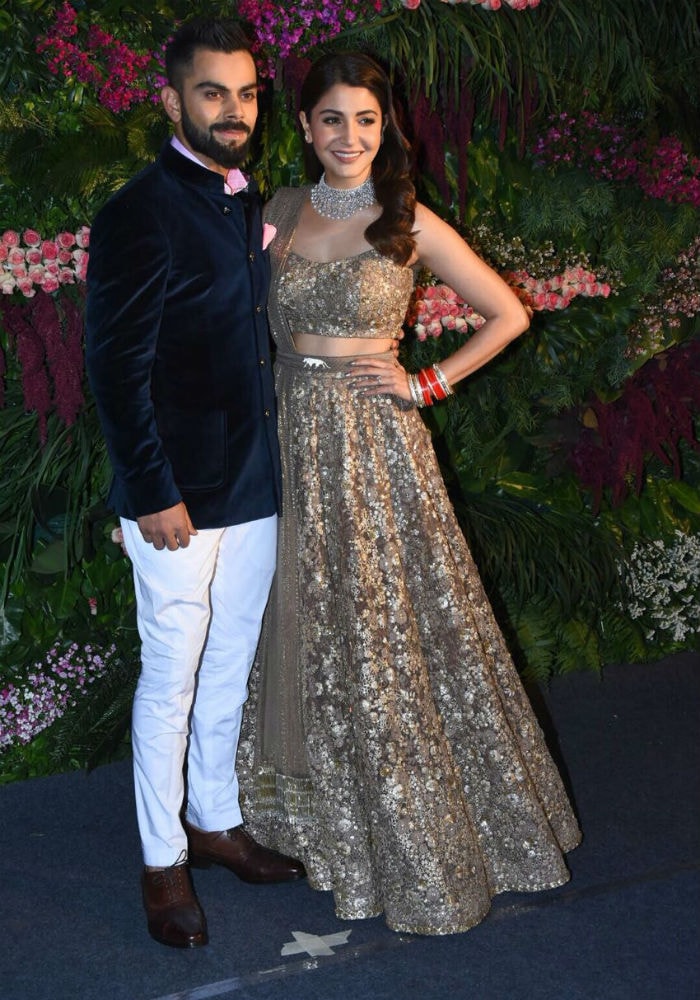 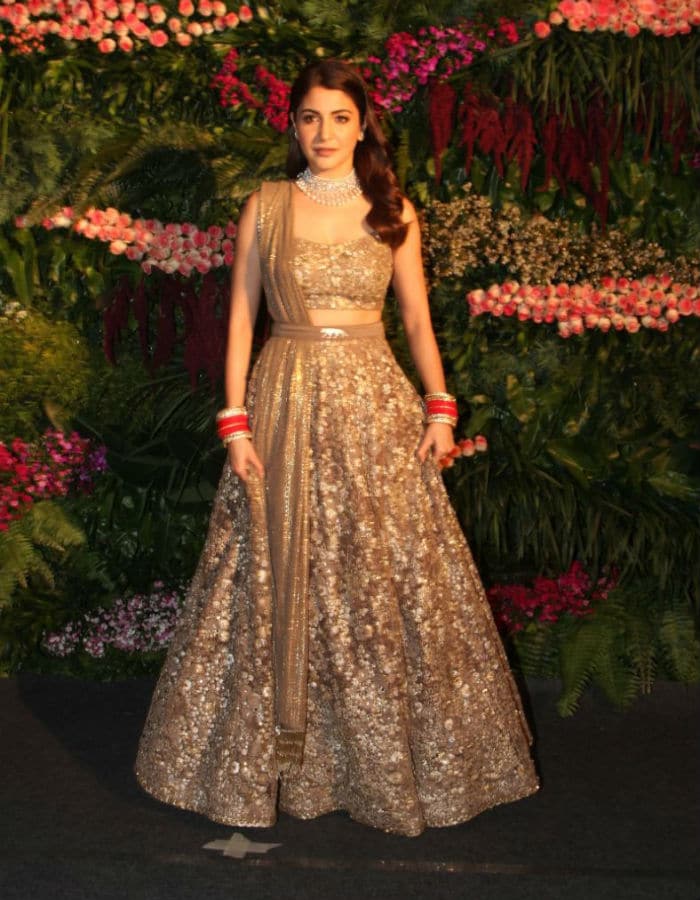 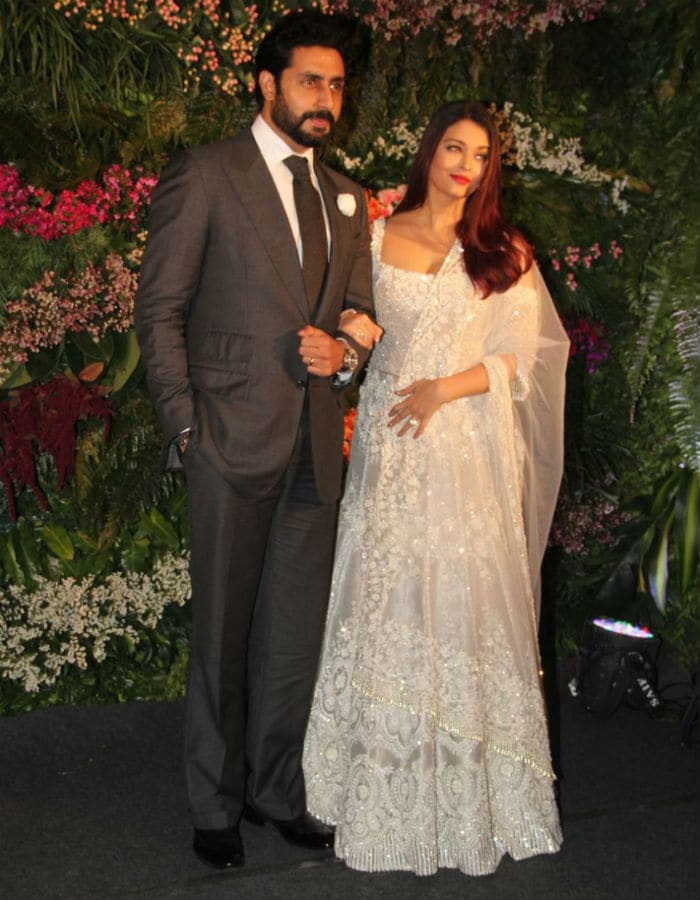 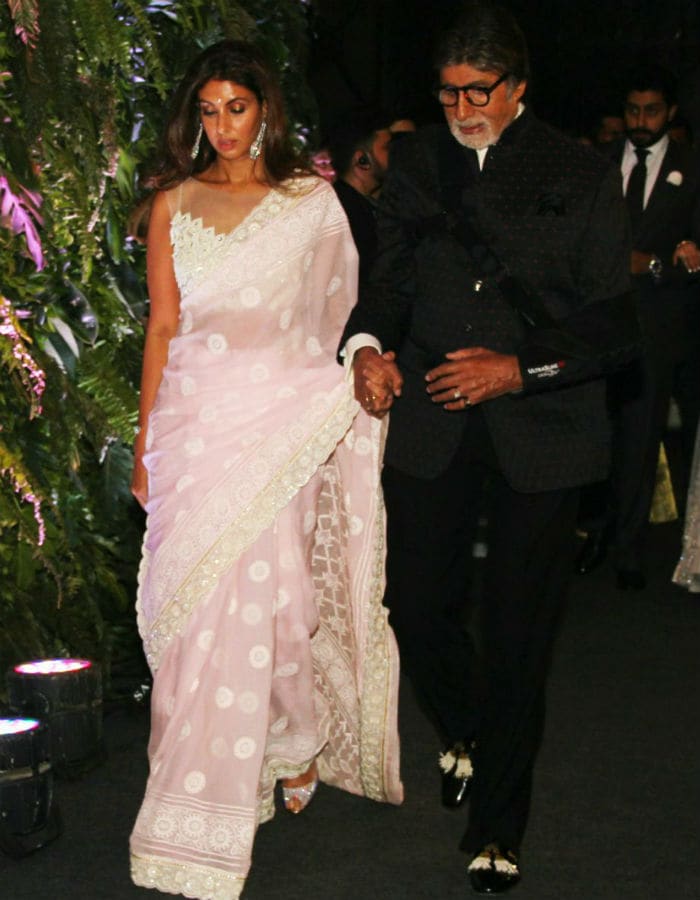 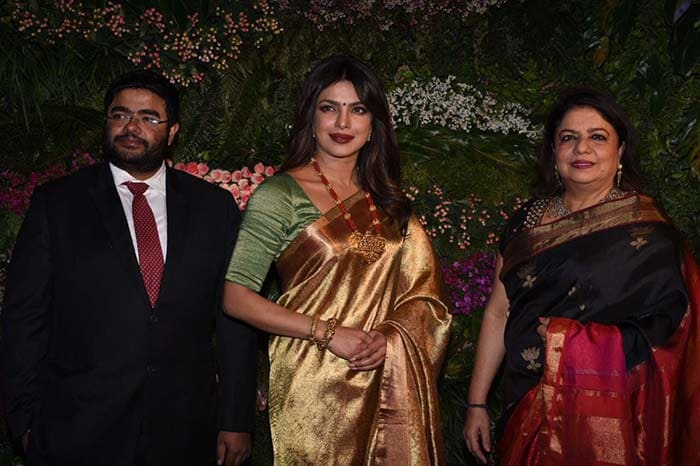 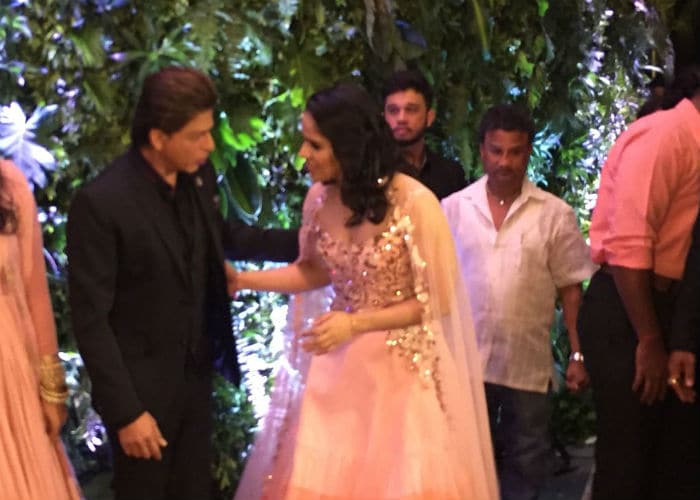 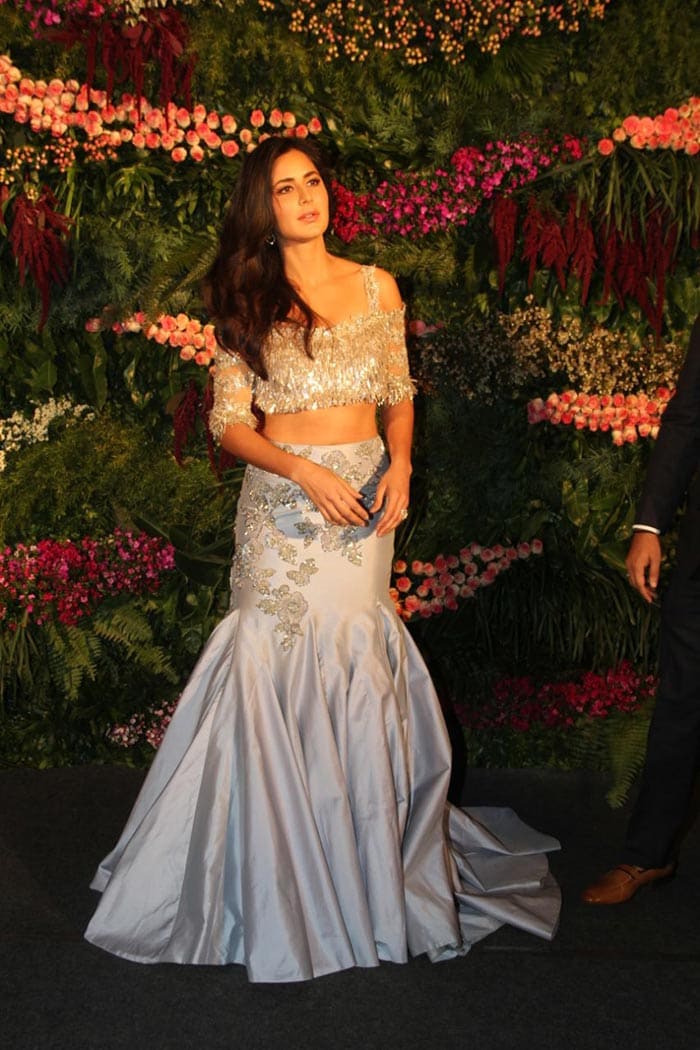 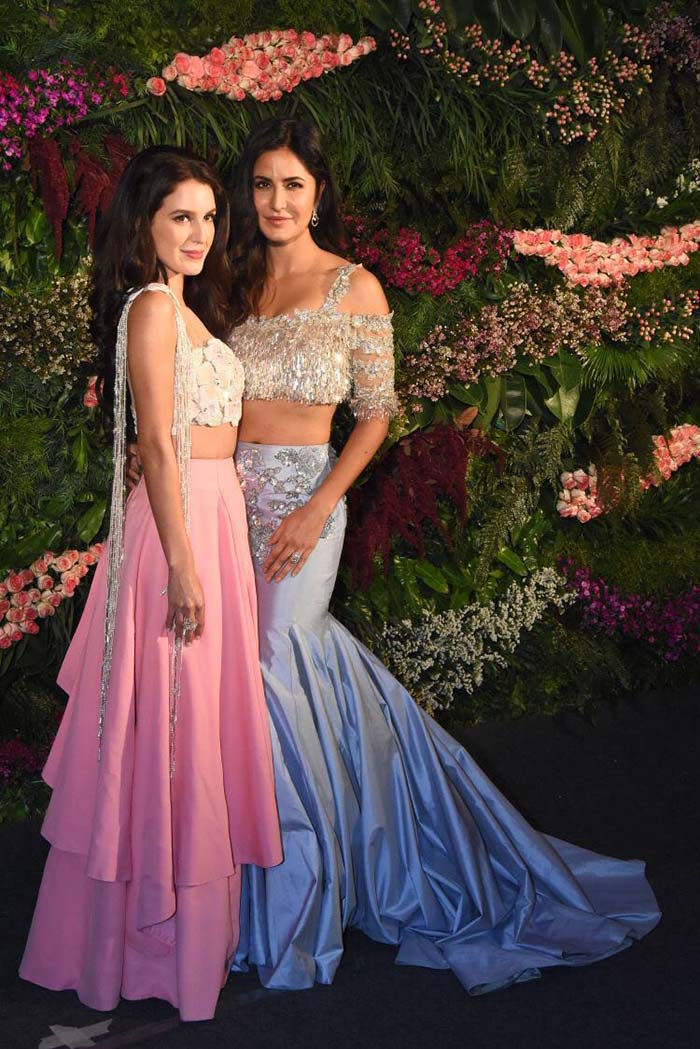 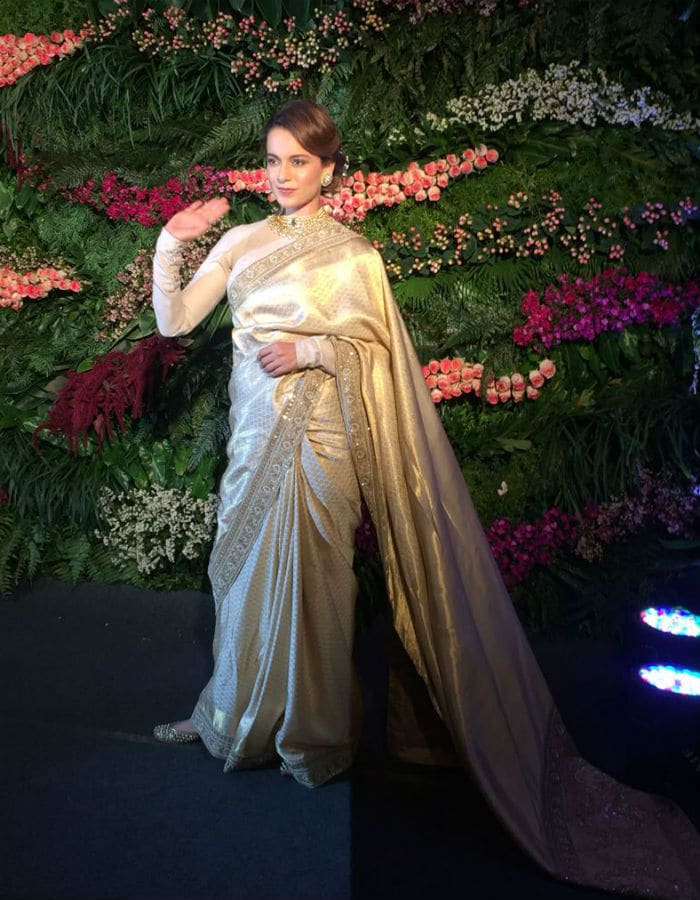 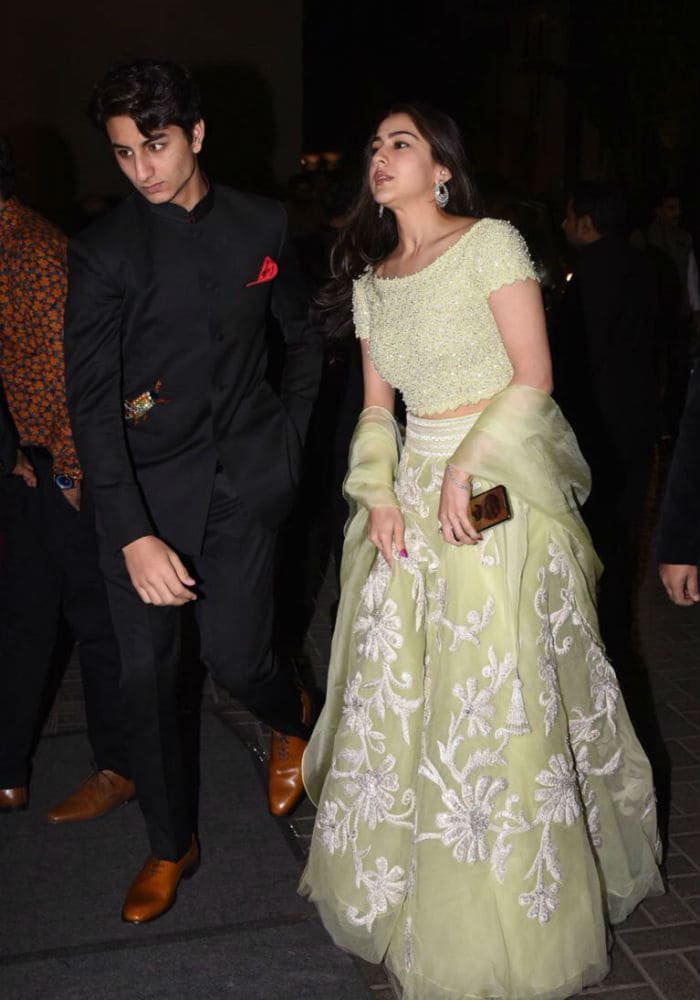 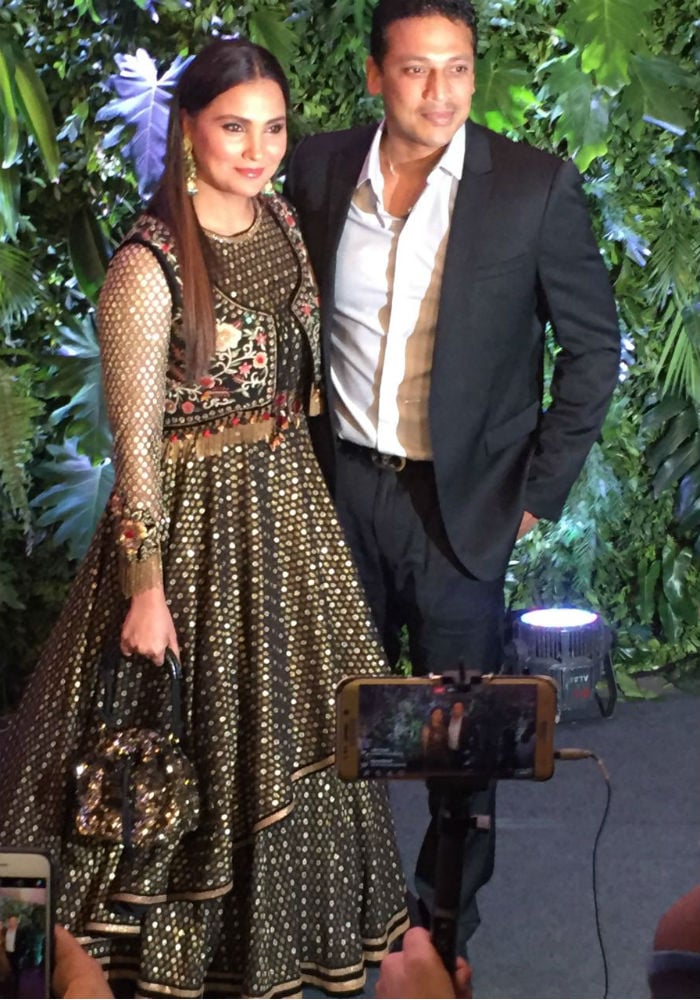 Lara Dutta and Mahesh Bhupathi walked in together 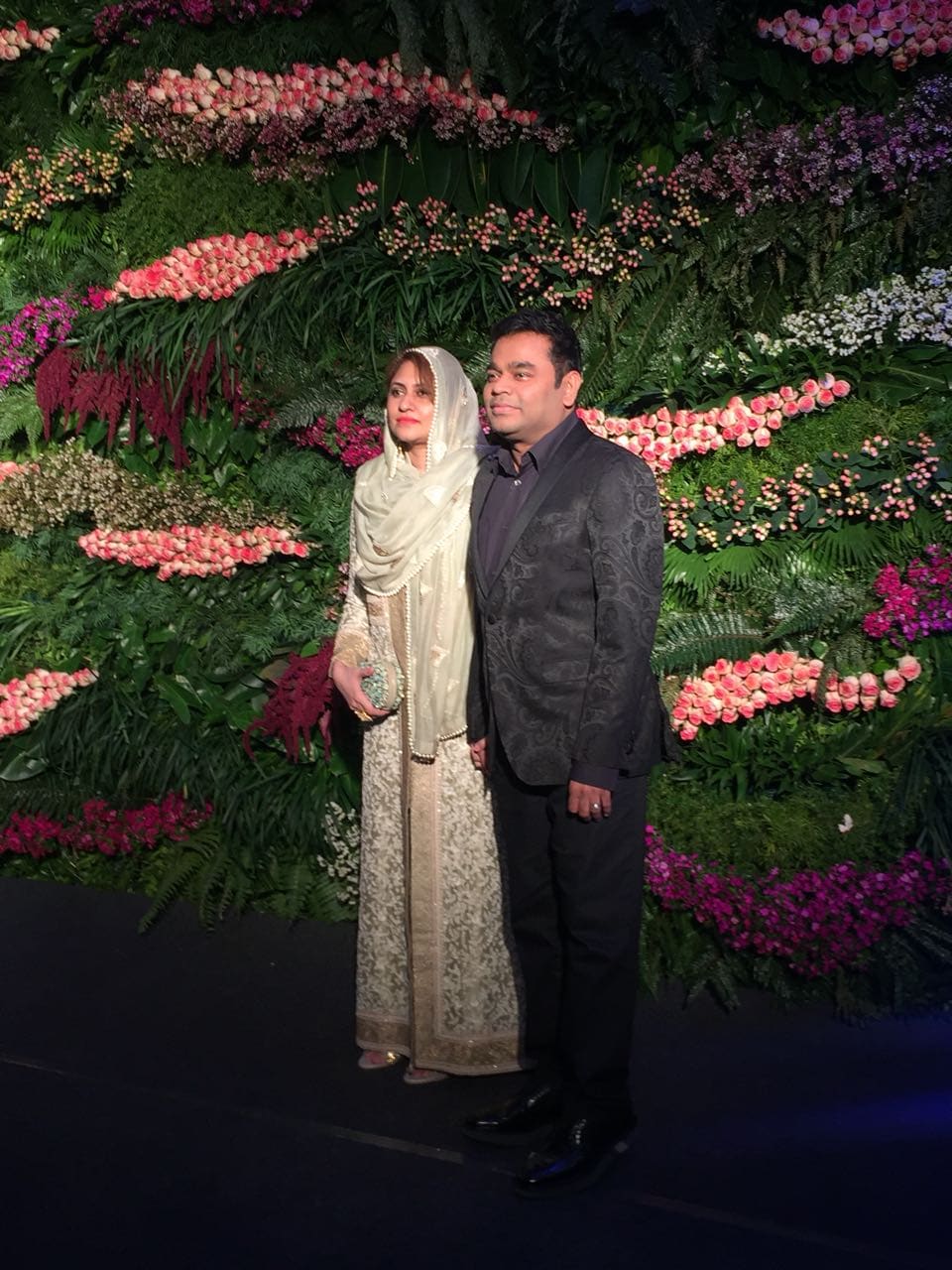 A R Rahman arrived with his wife 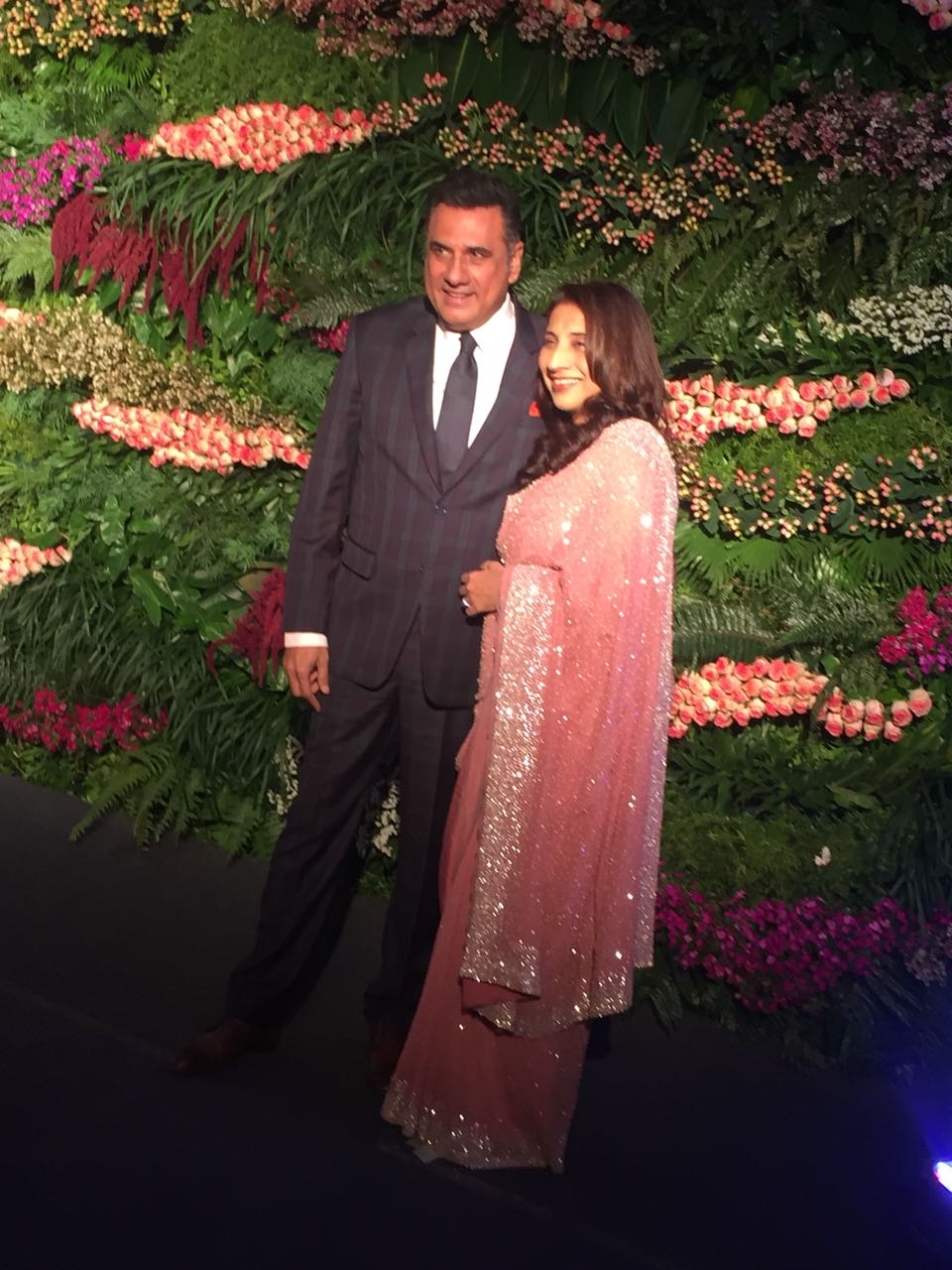 The cricket corner was headlined by Sachin Tendulkar and his family - daughter Sara and wife Anjali, and also Mahendra Singh Dhoni, who came with wife Sakshi and daughter Ziva. More of Virat and Anushka's cricketer friends included Cheteshwar Pujara, Ravichandran Ashwin, Jaydev Unadkat, Anil Kumble and Virender Sehwag. Yuvraj Singh and Harbhajan Singh dropped in together and another newly-married couple - Sagarika Ghatge and Zaheer Khan - were also part of the festivities. 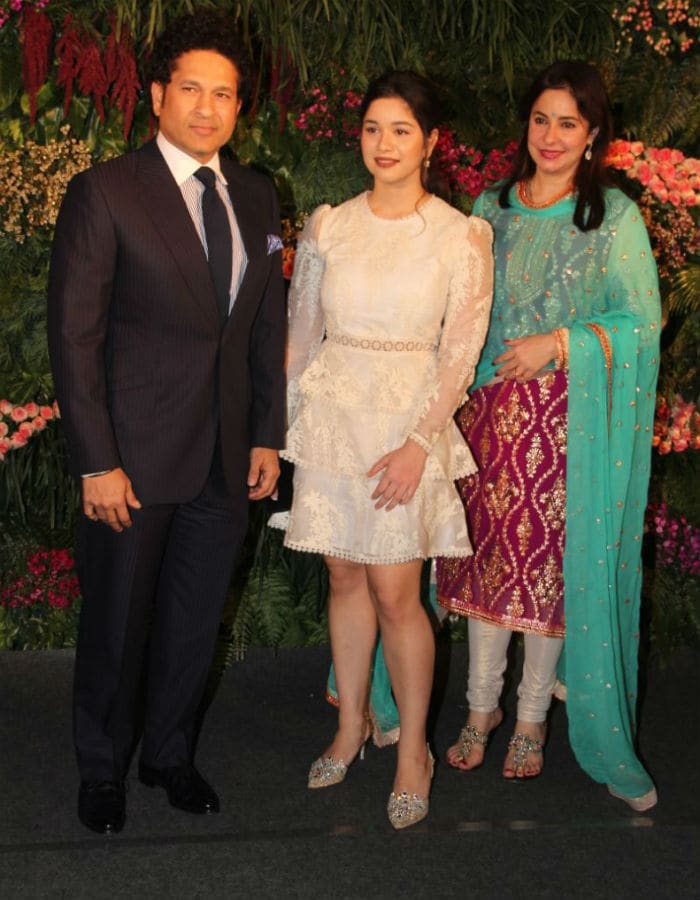 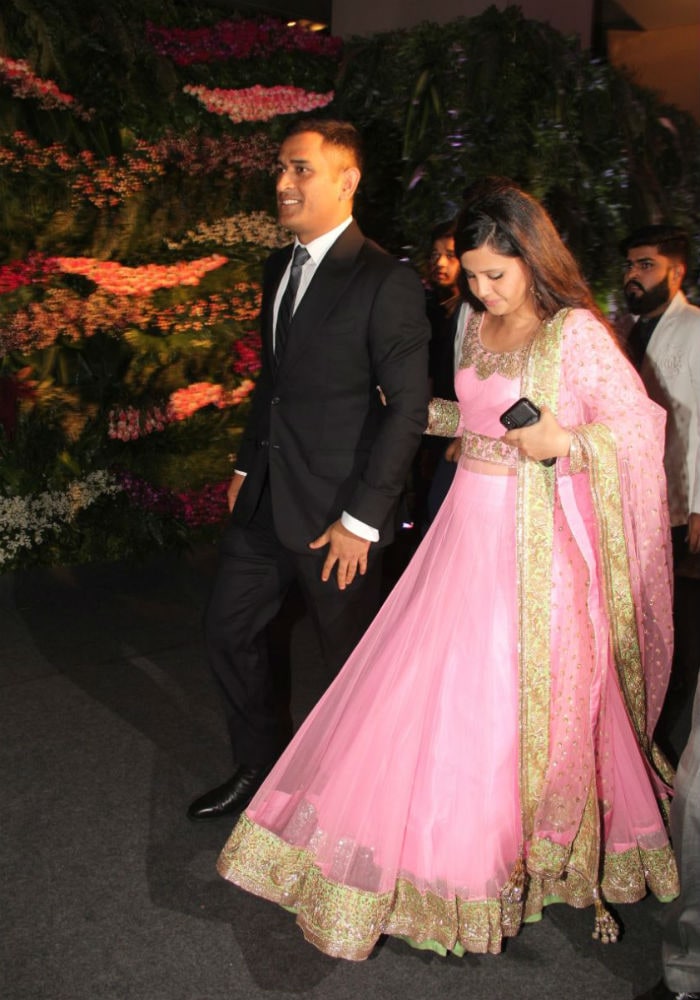 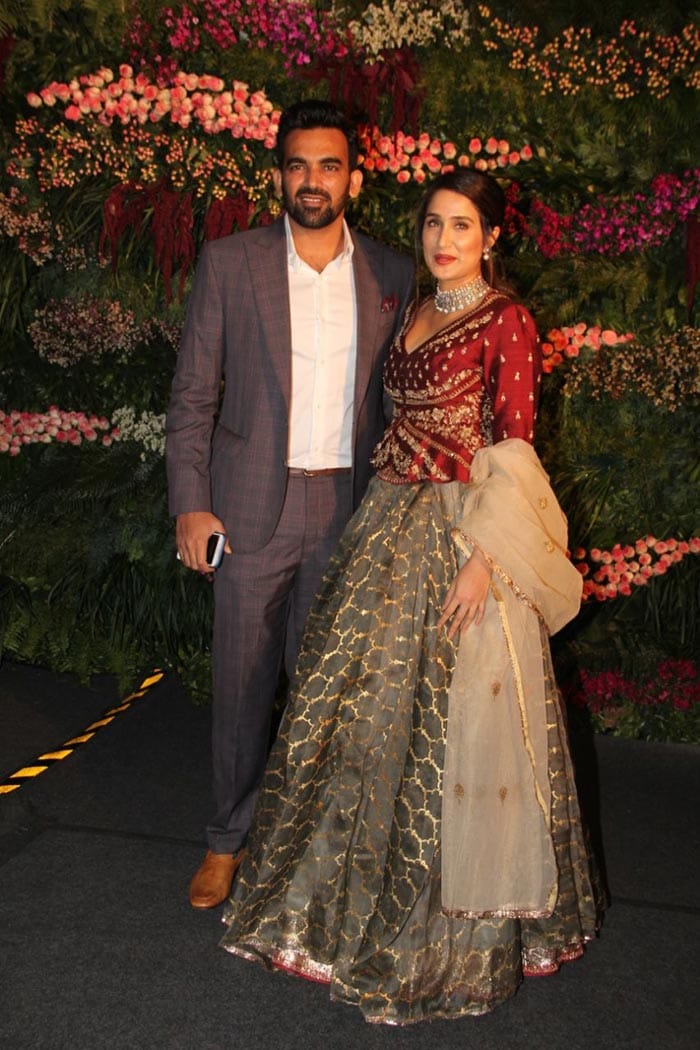 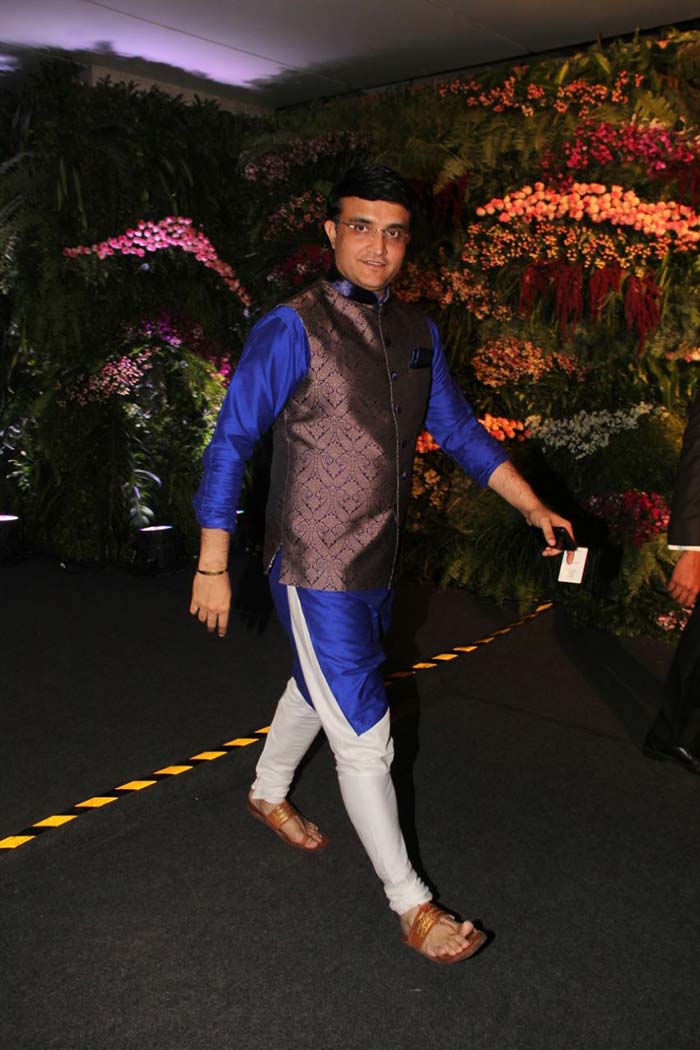 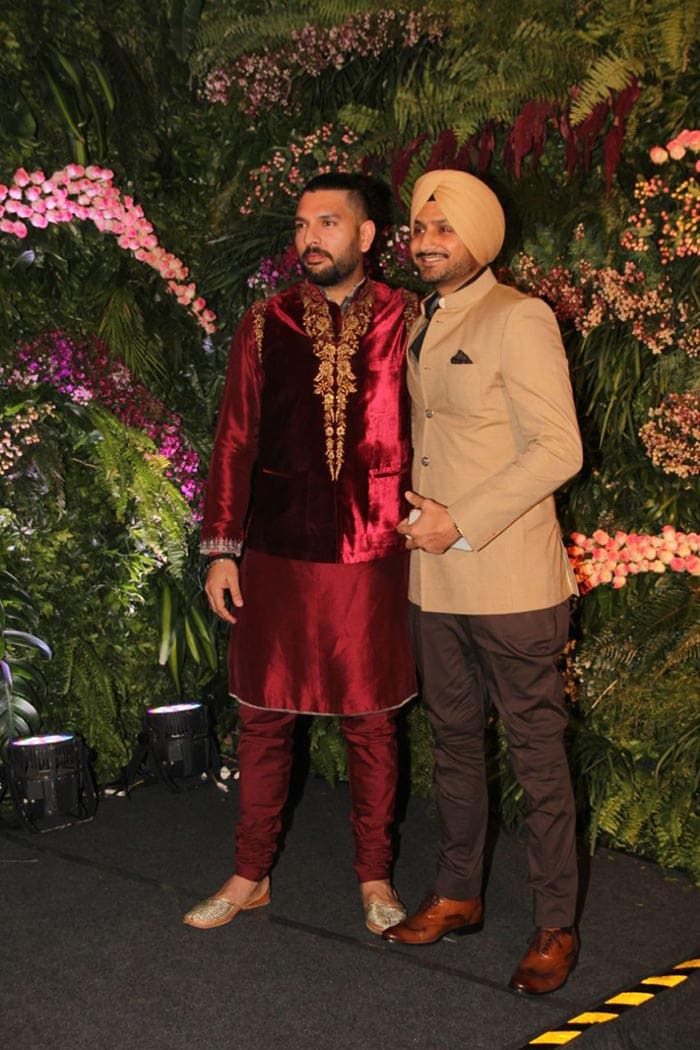 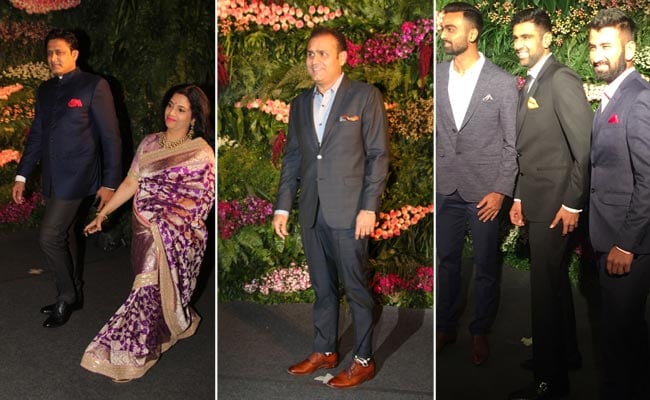 This is how Virat's family arrived at the venue:

Ahead of the Mumbai reception on Tuesday evening, Anushka and Virat, dressed in casuals, were spotted arriving at the venue together - Anushka in a denim jumpsuit and Virat in tee and pants.

After the Italian wedding on December 11, Virat and Anushka were spotted honeymooning in an undisclosed winter wonderland. Within minutes of being shared, the couple's honeymoon selfie had over two lakh 'likes' in the first 20 minutes itself.

Promoted
Listen to the latest songs, only on JioSaavn.com
Virat and Anushka flew into Delhi last week, in time for their reception party on December 21, the highlight of which was the presence of Prime Minister Narendra Modi. On Friday, they touched down in Mumbai, where they were reportedly to shift into the sea-facing apartment in Worli that Virat bought last year.

After wrapping their wedding festivities done, the newly-married couple will fly off to destination South Africa, where Virat will stay on for an upcoming series. Anushka is scheduled to touch base in Mumbai after New Year celebrations, where she will resume her pending work commitments - a film with Aanand L Rai, YRF's Sui Dhaaga and the promotions of Pari.