"It is a special moment for me. My wife is here and so is my brother," Virat said 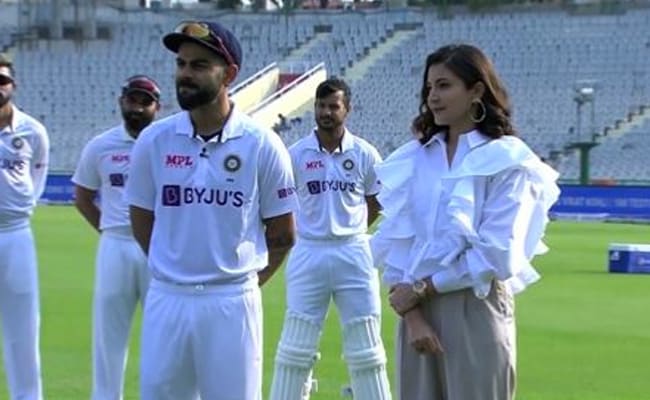 New Delhi : Actress Anushka Sharma made a special appearance on husband Virat Kohli's big day. The actress joined Virat on the pitch as he was presented his 100th Test cap in a felicitation ceremony in Mohali, Punjab. Anushka, dressed a ruffled white top and beige pants, clapped as Team India coach Rahul Dravid made a speech and presented Virat Kohli with a ceremonial cap to mark his 100th Test match ahead of the match itself, against Sri Lanka. Virat is the 12th Indian player to complete this milestone.

Calling the felicitation ceremony a 'special moment', Virat Kohli thanked his wife, Anushka Sharma, for accompanying him and said, "It is a special moment for me. My wife is here and so is my brother. Everyone is very proud. It is indeed a team game and it couldn't have been possible without you. Thanks to the BCCI as well. In present-day cricket, with the amount we play with three formats and an IPL, the one takeaway the next generation can take from me is that I played 100 games in the purest format."

What a moment to commemorate his 100th Test appearance in whites 🙌🏻

Words of appreciation from the Head Coach Rahul Dravid and words of gratitude from @imVkohli👏🏻#VK100 | #INDvSL | @Paytmpic.twitter.com/zfX0ZIirdz

Not just on the ground, Virat thanked Anushka for being a 'pillar of strength' during an interview with BCCI.tv on Thursday. He said, "I have become a completely changed man for all the right reasons. I have evolved in the right way. I'm very, very grateful and thankful to God to have a life partner like her and she's been an absolute pillar of strength for me." Anushka has accompanied Virat on several cricket tours abroad.

Anushka Sharma and Virat Kohli trend every time they make an appearance together, as today. The couple married in 2017 after having dated for several years; they welcomed daughter Vamika last year.