Another Madhavan Selfie Sends Internet Into A Spiral; Actor Responds To Fan Who Wants To Marry Him

The 49-year-old actor shared a selfie on Instagram recently, in which he can be seen sporting grey hair and beard 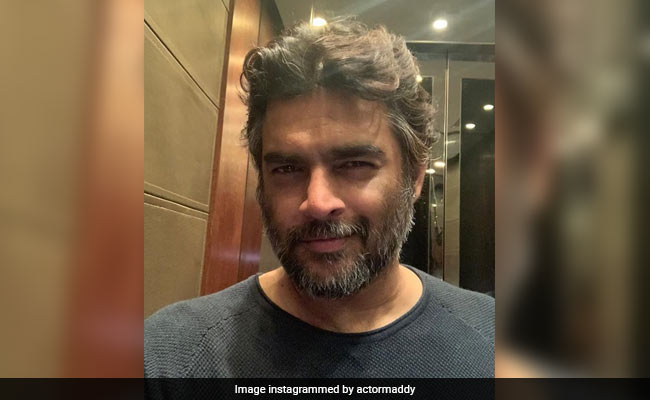 R Madhavan's response to a marriage proposal from an 18-year-old fan is winning hearts on the Internet. The 49-year-old actor shared a "getting older" selfie on Instagram recently, in which he can be seen sporting grey hair and beard and his fans are going crazy over his new look, especially a young female fan, who went on to express her desire to marry the 3 Idiots actor. Instagramming the selfie, R Madhavan wrote about the journey of his upcoming film Rocketry: The Nambi Effect: "Editing is so much fun and exhausting. Enjoying and fearing it... End of long travel day. Definitely getting older..." and accompanied his post with hashtag #rocketrythefilm.

Soon after, R Madhavan started getting compliments from his fans such as "the hottest on Instagram" and "forever crush." A female fan commented: "Is it wrong that I am 18 and wanna get married to you?" On this, R Madhavan came up with a kind response and wrote: "ha ha God bless you, you will find someone way more worthier."

First, take a look at the selfie posted by R Madhavan:

Editing is so much fun and exhausting:. Enjoying and fearing it..End of long travel day. Definitely getting older .. #rocketrythefilm #actormaddy #Rocketryfilm

And here's what he replied to his fan: 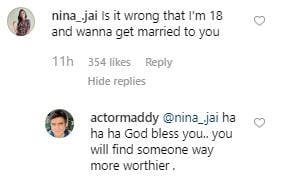 A screenshot of R Madhavan's reply on fan's comment

Not only fans, several celebrities such as Rohit Bose Roy, Shalini Pandey and Vishnupriya Ravi also dropped adorable as well as witty comments on R Madhavan's post. The actor even revealed the secret of his flawless skin in his reply to Shilpa Shetty's husband Raj Kundra's comment. When Raj Kundra asked R Madhavan: "Have you been using fair and handsome?" he replied: "Nope just love and fresh air bro." 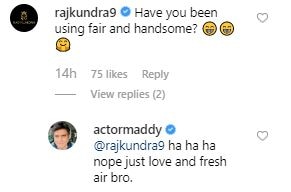 A screenshot of R Madhavan's reply on Raj Kundra's comment

"Getting older never seemed so good! And much excited for your venture," wrote Shalini Pandey while Rohit Roy commented "Ufff" with a smiley emoticon. Singer Vishnupriya Ravi, who became popular for her song Everest Anchuna from Mahesh Babu's 2019 film Maharshi, commented: "Not even legal to look so handsome. How just how?"

This isn't the first time R Madhavan's photo is breaking the Internet. In 2017, the actor shared a shirtless selfie, in which he sported a much leaner look. The picture went crazy viral in no time and collected thousands of likes on Instagram. It was reported that R Madhavan lost some 11 kilos at that time. A few days after posting the selfie, R Madhavan opened up about the viralness and said that it left him 'embarrassed.' In an interview with news agency PTI, he said: "Now I'm a little embarrassed and under pressure because I don't look like that all the time and I am trying to see if I can be accepted again as a normal-looking guy. That was an unprecedented amount of attention from the world. I am embarrassed and thankful at the same time."

Here's the selfie we are talking about:

Rocketry: The Nambi Effect will mark R Madhavan's debut as a director. The film is based on the life of scientist and aerospace engineer S. Nambi Narayanan and Madhavan plays the role of Nambi in the film.

S. Nambi Narayanan was in-charge of the cryogenics division at the Indian Space Research Organisation (ISRO). He was falsely charged of espionage in 1994, which led to his arrest later. However, all the charges against him were dropped by the CBI and the Supreme Court in 1996 and 1998 respectively. He was also awarded Padma Bhushan in 2019.

On the work front, R Madhavan was last seen in Anand L Rai - directed film Zero, in which he made a special appearance. The film also featured Shah Rukh Khan, Katrina Kaif and Anushka Sharma.