Another Day, Another Adorable Video Of Karan Johar's Twins Yash And Roohi

"Life is puzzling enough and then I have them!" wrote Karan Johar 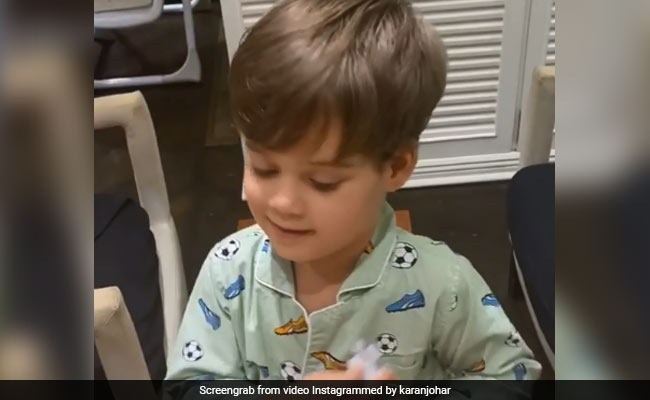 Yash in a still from the video. (Image courtesy: karanjohar)

Karan Johar is back again with another hilarious yet adorable video of his twins Yash and Roohi. This time, the filmmaker gave us a glimpse of the little munchkins' fun-filled evening activities, which also include solving puzzles. On Tuesday, Karan shared a video of Yash and Roohi solving a jigsaw puzzle game with his mother Hiroo Johar. The video starts with Roohi and Yash doing a puzzle and looking at Hiroo Johar as she assembles the photo pieces to solve a puzzle. The filmmaker can be heard asking his mother: "Why are you solving this? It says this is for 3-year-old kids so why are you doing this? Dil toh bacha hai ji?" After Hiroo Johar replies that she is teaching Roohi to solve puzzles, Karan says: "You are such a great influence, a true bonafide institution of excellence."

Meanwhile, Yash can be seen moving to a different corner of the room to play some other game at the end of the clip. Sharing the video, Karan Johar wrote: "Life is puzzling enough and then I have them!!! Not giving me any attention!"

Take a look at the Karan Johar's post here:

Life is puzzling enough and then I have them!!! not giving me any attention! #lockdownwiththejohars

We have handpicked a few of the hilarious videos of the little Johars for you. You can thank us later:

On the work front, Karan Johar has also directed movies such as Kuch Kuch Hota Hai, Kabhi Khushi Kabhie Gham, My Name Is Khan and Student Of The Year. He will also be directing the period drama Takht. His upcoming ventures as a producer include Sooryavanshi, Dostana 2, and Brahmastra.He has backed many films such as Kal Ho Naa Ho, Kaal, Kabhi Alvida Naa Kehna, Wake Up Sid, Agneepath, Yeh Jawaani Hai Deewani and Badrinath Ki Dulhania among others.