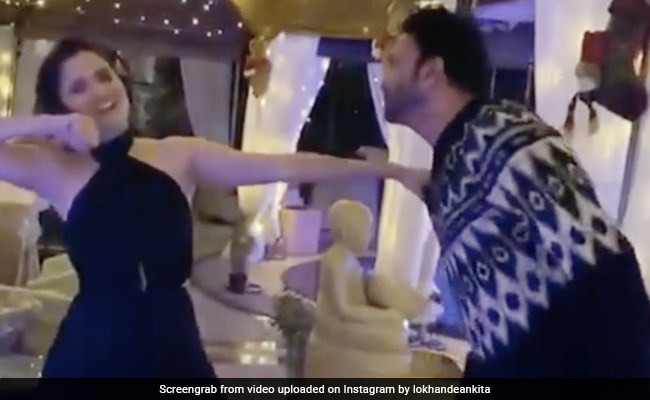 Ankita Lokhande is a woman of many talents. The star, who has proved her acting mettle in numerous projects, is also a graceful dancer. Now, it looks like she has discovered another talent – that of being a DJ who has the people on the dance floor grooving to her tunes. Ankita Lokhande on Sunday shared a video of herself having a gala time at the DJ console, dancing with her husband Vicky Jain. The newlyweds are also joined by actress Sana Makbul in the video. Sharing a glimpse of all the fun, Ankita Lokhande wrote in the caption, “We killed it Mr J. DJ Ankita Lokhande,” and tagged her husband.

The song that Ankita Lokhande chose to play was Bin Tere Sanam from the 1991 film Yaara Dildara. In the video, Ankita Lokhande can be seen asking, “Are you guys having fun? Are you enjoying?” to the group gathered around her. The caption of the video also included the hashtags “Mr and Mrs”, “Partners for life” and “Anvi Ki Kahani,” which was also the hashtag of choice for their wedding held last month.

Ankita Lokhande also bid goodbye to 2021 with a special video with her girlfriends Sana Makbul, Mishthi Tyagi and Ashita Dhawan. Sharing a video montage of pictures of the group having some fun by the pool, Ankita Lokhande wrote, “This year will be stronger, braver, kinder and unstoppable…This year will be fierce! What say, girls.”

Before this, Ankita Lokhande posted a set of pictures with her husband Vicky Jain and penned a heartwarming note, “The best feeling in the world is being with someone who wants you as much as you want them.”

Ankita Lokhande married Vicky Jain, who is a businessman, on December 14 in Mumbai. The actress is known for her work in the television show Pavitra Rishta and films such as Manikarnika and Baaghi 3.