Nakuul Mehta shared a picture with his wife and son on Instagram. 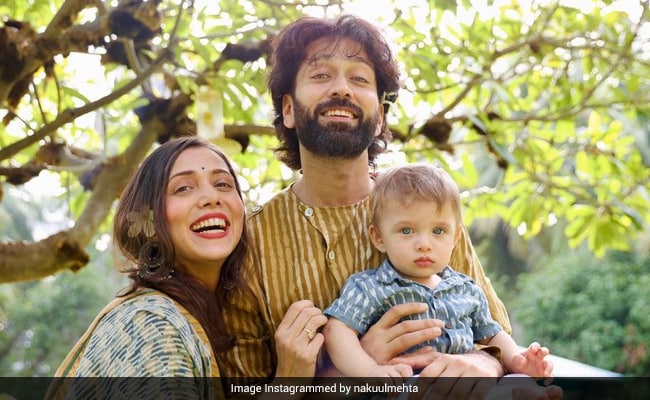 Actor Nakuul Mehta is a complete family man. When he is not impressing fans across the country with his acting skills, Nakuul Mehta loves to spend time with his wife, singer Jankee Parekh and their son Sufi. And now the actor has shared a family photo in which he is seen with Jankee by his side and Sufi in his arms. Sharing the image, he wrote, “Itni si khushi ( Just a little happiness) featuring 8-month-old Junior Mehta and Parekh. Nakuul further added in the caption, “P.S. We are now OPEN to socially distanced blessings and hugs.”

Replying to the image, actress Anita Hassanandani, who is a new mother herself, wrote, “ Look at him,” with heart-eye emojis.

Veteran actor Gajraj Rao summed up what we are all feeling and wrote, “This is beautiful,” with heart emojis.

While fans were all happy to catch a glimpse of baby Sufi, the little one first gave social media a good look at himself nearly a month ago. Nakuul Mehta and Jankee Parekh shared a Reels clip of their darling son and introduced him to the world. Prior to this, while Sufi did feature in images with his mom and dad, his face always remained hidden.

In the post that finally revealed Suf's face to the world, we see him sitting on the couch with a gleeful look on his face. The caption, written on behalf of Sufi by his parents read, “Hi, I am Sufi and I am 7 months old today. It's so nice to finally meet you. P.S. Letting my folks share this on my behalf ‘cause I got cool things to do!”

Reacting to this video, actress Shrenu Parikh wrote, “OMG. Can I cry my heart out? Please put a kaala teeka! He's adorable.”

Actress  Kashmira Irani said, “Sufi. Welcome baby...Kashu maasi is sending you so much love and light.”

Nakuul Mehta is known for his work in shows such as Pyaar Ka Dard Hai Meetha Meetha Pyaara Pyaara, Ishqbaaaz, and Bade Achhe Lagte Hain 2, among others. Nakuul Mehta has been married to singer Jankee Parekh since 2012. The couple welcomed their first child on 3 February 2021.