Anita Hassanandani wrote in her caption, "Getting ready for Reddy." 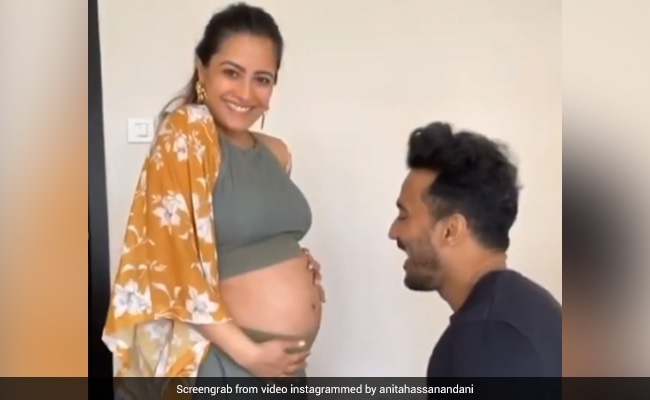 Anita Hassanandani and Rohit Reddy in a still from the video. (courtesy: anitahassanandani)

Anita Hassanandani's latest Instagram post calls for congratulations. Why, you ask? Well, the TV star announced her pregnancy on social media on Saturday. Anita shared a super cute video with her husband Rohit Reddy, with whom she is expecting her first child. The video shared by the couple, showcases their journey from being best friends to getting married and expecting a child together. Anita wrote in her caption, "Getting ready for Reddy." Ahead of the big announcement, Anita had also shared a teaser of sorts, on Friday, in which she wrote, ''Tune in this Saturday at 4:00 PM on Triller (app) to find out what's cooking in the Reddy household.'' Meanwhile, congratulatory wishes from friends and fans started pouring in soon after the video was shared on social media.

Tune in this Saturday at 4:00 PM on Triller to find out what's cooking in the Reddy household ;) ;) Download #Triller and follow me on my triller id: @anitahassanandani to be the first in the world to know!! @triller @triller_india #gettingreadyforreddy @rohitreddygoa @raj.incognito

Anita Hassanandani married Rohit Reddy in the year 2013. The couple also participated in the dance reality show Nach Baliye Season 9, which aired in 2019.

Anita Hassanandani is a popular name in the Hindi television industry. The actress is best known for starring in TV shows such as Ye Hai Mohabbatein, Kabhii Sautan Kabhii Sahelii and Kkavyanjali, to name a few. She has also starred in movies like Kucch To Hai and Krishna Cottage. Anita was last seen in a brief appearance in the TV show Naagin 4. She played the role of Naagin Vishakha Khanna.

Other than that, Anita Hassanandani has also worked in several Telugu, Kannada and Hindi films such as Sreeram, Veera Kannadiga, Aadanthe Ado Type, Yeh Dil and Hero, among others.