Anil Kapoor Shares A Throwback Picture From His School Days 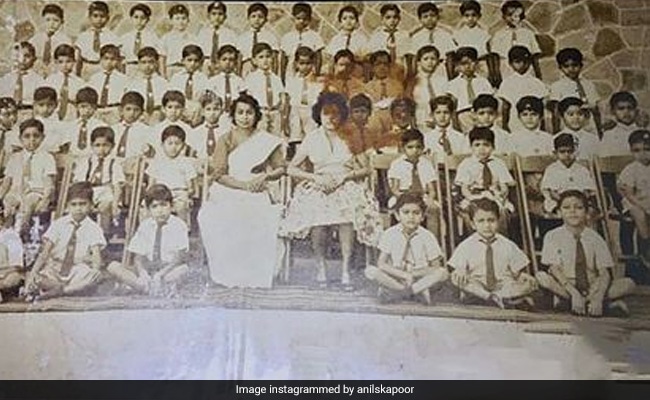 On Sunday, actor Anil Kapoor shared a throwback picture from his school days. Taking a trip down the memory lane, Anil Kapoor dropped the class photograph of himself along with his batchmates. Sharing the childhood pic, Anil wrote: "Spot me if you can!," along with hashtags like #1ststandard #throwbackmemories and #schooldays. Reacting to the post, an Instagram user wrote: "12th boy from left in 3rd row." Anil Kapoor made his Bollywood debut with Umesh Mehra's Hamare Tumhare in 1979. He also featured in a Telugu film Vamsa Vruksham in 1980 directed by veteran Bapu.

Recently, Anil Kapoor shared a series of pictures on his Twitter handle, the actor can be seen strolling on the beach in Sri Lanka. In another shot, he can be seen playing snooker. Our favourite has to be the one in which he can be seen flexing his muscles as he poses for the camera. Anil Kapoor captioned the Twitter post: "Exploring Bentota." He added the hashtag #ADayInSriLanka. Check out Anil Kapoor's post here:

On the professional front, Anil Kapoor was last seen in the Netflix thriller AK vs AK, co-starring filmmaker Anurag Kashyap. He also featured in Malang, featuring Disha Patani and Aditya Roy Kapur. The actor has a super busy schedule ahead. He will next be seen in Dharma Productions' Jug Jugg Jeeyo, with Neetu Kapoor, Varun Dhawan and Kiara Advani. The actor also signed Sandeep Reddy Vanga's Animalalong with Ranbir Kapoor, Bobby Deol and Parineeti Chopra.

The actor has also signed Fighter with Hrithik Roshan and Deepika Padukone.