Irrfan Khan shared a picture from the sets of Angrezi Medium and wrote: "Its time to know Champak Ji" 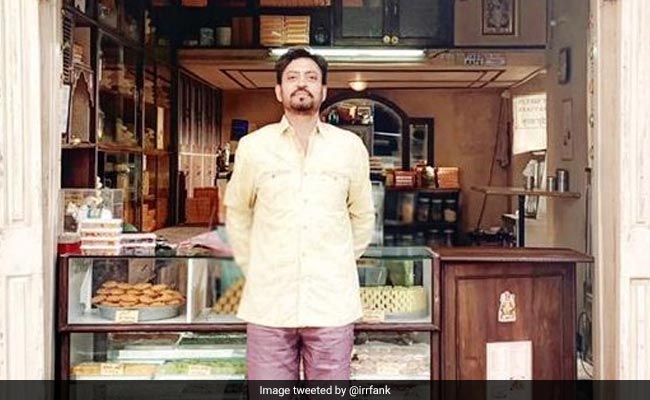 Angrezi Medium: Irrfan Khan on the sets of the film. (Image courtesy: irrfank)

Irrfan Khan occupied a spot on the list of trends all of Monday. Why, you ask? Well, the actor shared a picture of himself from the sets of his forthcoming film Angrezi Medium on his Twitter handle. The actor, who started shooting for the Homi Adajania-directed film last week, gave his fans a sneak peek of his look from the film. Going by the caption on his post, seems like Irrfan will be seen playing the role of a shopkeeper in the film (just like the previous part). Dressed in a yellow shirt, paired with brown pants and with hands placed behind his back, the Karwaan actor can be seen standing in front of a shop named Ghasiteram Mishthan Bhandar.

Irrfan quenched the curiosity of his fans to some extend by sharing the picture and accompanied it along with an interesting caption. "GMB serving since 1900s. It's going to be fun to tell another story Angrezi Medium coming soon, with Mr Champakji...Aa raha hu phir entertain karne sabko. Its time to know Champak Ji," wrote Irrfan.

Meanwhile, Radhika Madan, who is also a part of Angrezi Medium, shared a picture from the sets of the film. "As excited as the man behind. So grateful for this new journey," read the caption on Radhika's post.

Angrezi Medium went on floors last week. A picture of film's lead actor Irrfan Khan, along with the film's producer Dinesh Vijan and director Homi Adajania was shared on the official Instagram account of Maddock Films.