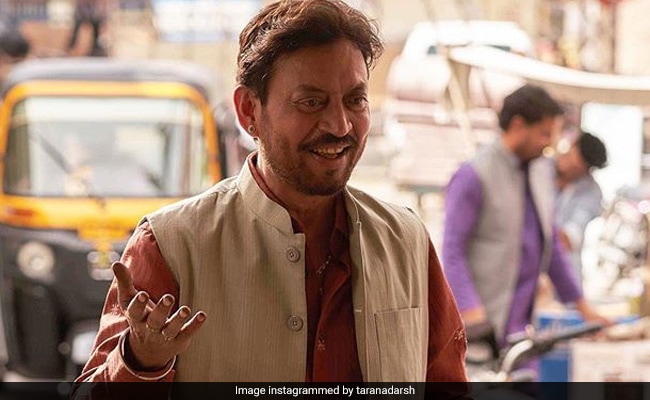 Irrfan Khan's Angrezi Medium has taken a hit after the shut-down of theatres across India amidst the outbreak of the novel coronavirus. Trade analyst Taran Adarsh reported that on its opening day - Friday - Angrezi Medium has made a score of Rs 4.03 crore. In his post, he added the films' box office numbers have been massively impacted by the closing of cinemas. "Note: Biz has been severely affected due to closure of cinema halls in several states. #CoronaVirus #COVID19," he wrote. Angrezi Medium is Irrfan Khan's first release after he returned to India last year following months of cancer treatment in London.

Meanwhile, the makers of the film announced that the movie will re-released in India once the situation improves and theatres re-open. On Friday evening, director Homi Adajania posted this message on his Instagram story: "At midnight all theatres will close across India till the authorities give us further notice. We will re-release Angrezi Medium when it is safe to do so. Till then stay safe and be kind to each other."

Speaking to news agency IANS, producer Dinesh Vijan said: "As the film now reaches India, we have already received unabashed love from Dubai and other international territories. Due to unforeseen circumstances it will however not release in Kerala, Delhi and Jammu and Kashmir. We hope for the same affection and support you've been giving us since day one. Our movie will reach these places when the time is right, but rest assured, just like Irrfan said, 'wait for us'."

Angrezi Medium opened to encouraging reviews on Friday. In his review for NDTV, film critic Saibal Chatterjee wrote: "To state the obvious one more time, Irrfan Khan is absolutely fabulous as Champak. He flits effortlessly from the emotional to the ecstatic to the zany, creating some endearing moments in concert with Dobriyal and Kiku Sharda (who plays a childhood friend-turned-travel agent)."