AndhaDhun Movie Review: Watch Andhadhun with your ears, eyes and minds open. You will come away with your senses heightened. 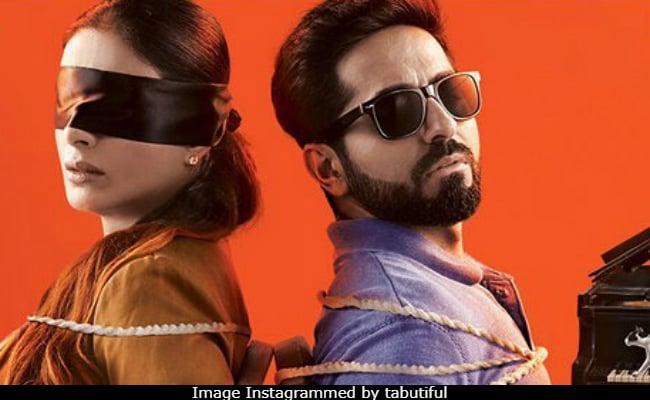 AndhaDhun Movie Review: A poster of the movie (courtesy tabutiful)

Down the decades - from the time of Anmol Ghadi, Andaz and Sangam to the era of Saajan, DDLJ and Parineeta - grand pianos have stirred great emotions in Hindi film song situations. Euphoric, romantic, playful, plaintive, gloomy, et al: they've traversed a wide gamut. In Sriram Raghavan's sly, smart thriller AndhaDhun, which is a tip of the hat to Vividh Bharti's Chhaya Geet and Doordarshan's Chitrahaar, the musical instrument for all seasons gets an all-new portentous ring.

AndhaDhun unfolds primarily in three distinct spaces in Pune - a middle-class bachelor's pad on Prabhat Road, an upscale Magarpatta City apartment of a former movie star, and a popular watering hole frequented by the well-heeled. Each of these locations has a grand piano. The instrument gives the film a lush soundscape all right but, in keeping with the spirit of the twisted tale, the sensations it triggers, underscores or accompanies are deliberately askew. 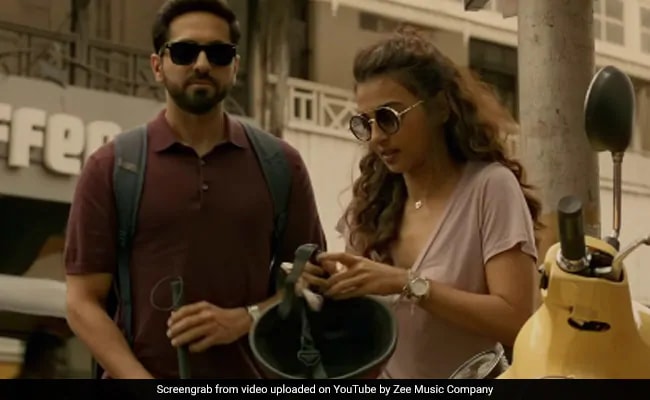 The plot, inspired by a duly acknowledged French short film, Olivier Treiner's L'accordeur (The Piano Tuner, 2010), about a young musician who on a whim decides to act blind after failing to win the Bernstein Prize, rests on several acts that are either hard to fathom, if not outright inexplicable, or are unsettlingly abrupt: feigned blindness, a cold-blooded murder and cover-ups and conspiracies that go awry, among many other vicious instances of omission and commission.

AndhaDhun, literally 'blind melody', also puns on the Hindi word (andhadhund) that means 'indiscriminate'. But there is nothing random in this intelligently paced and structured crime drama that pans out against an intriguing interplay of sights and sounds. The film, an absolute treat for thriller aficionados who like the genre seasoned with wry wit, bears testimony to the director's uncommon storytelling skills on the one hand and his abiding attachment to 1970s Hindi film music on the other.

The former attribute is manifested in the twists and turns that tumble forth from Raghavan's narrative quiver at a dizzying pace; the latter finds reflection in the inspired casting of yesteryears star Anil Dhawan as a matinee idol whose career is now defunct.

The songs picturized on the genial man - the instrumental and vocal interludes are snatches from early 1970s movies starring Dhawan (Honeymoon, Piya Ka Ghar, Hawas, Annadata) - play a germane role in this spiffily scripted, superbly acted film. It serves up a cocktail of black humour, clever wordplay and a lively background score (composer Amit Trivedi also contributes a slew of original songs) to soften the shocks stemming from the actions of a bunch of cold, clinical, morally dodgy individuals grappling with life-threatening upheavals.

A murder scene - the film's principal turning point - sums up the delicious duality of the AndhaDhun tone. A man is shot as he enters his own home, a bottle of red wine drops, the spilled beverage mixes with blood and the bright red compound that forms as a result trickles across the floor. That is AndhaDhun for you: a blend of blood and wine.

The striking editing rhythm adopted by Pooja Ladha Surti (who has also authored the screenplay along with Raghavan, Arijit Biswas and Yogesh Chandekar) is in full play at this point, as is the approach of a director who keeps his tongue firmly in cheek while giving full rein to the deeply flawed and dangerous men and women who populate the plot.

Irony abounds in AndhaDhun from the very outset. The film opens with a text card that reads: "What is life? It depends on the liver." It isn't until pretty late into the drama that organs enter the equation and that opening line assumes added meaning. That apart, a 'blind' man not only sings Naina da kya qasoor (Why blame the eyes?) but also has a photograph of his idol, Kishore Kumar, placed above his piano. It's a world in which nothing can be taken from granted, be it living, dying, killing, seeing, believing, imagining, pretending or playacting. There's a price to be paid for every shot in the dark.

Even a boy - he initially comes across as a harmless prankster - isn't averse to a bit of avarice and manipulation. Such is Raghavan's mystifying universe. Summarizing the travails of the characters, lyricist Jaideep Sahni comes up with a line that says it all - "O bhai re dil hain ya gehri khai re..."

Here are the broad contours of the plot: a 'blind' pianist (Ayushmann Khurrana) and a bar-owner's daughter (Radhika Apte) meet literally 'by accident'. The latter's two-wheeler knocks the former down. The lady apologizes profusely and then learns of the unharmed victim's vocation. She becomes the man's muse and lover. But their bonding is short-lived.

The pianist's ability to rustle up moving melodies draws the attention of the past-his-prime actor, who invites him to his home for a private performance. The money is good, so the musician accepts the offer. What ensues in the apartment in which the movie star lives with his second wife (Tabu) sends the tunesmith into a tailspin. 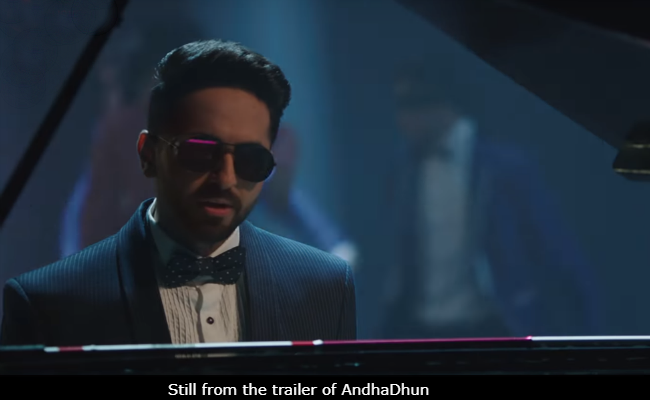 For Raghavan, maker of Ek Hasina Thi, Johnny Gaddar and Badlapur, this constitutes just the kind of terrain that he thrives upon. For characters who think nothing of resorting to subterfuge to serve their selfish ends and in a world in which morality is an eminently flexible thing, all manner of deviousness is in the realm of possibility.

The blind man, on and off the piano, plays games with himself and others. The actor's wily wife stops at nothing to get what her heart yearns for. A crooked cop, often at the wrong place at the wrong time, is a past master at bending the rules and getting away with it. Raghavan orchestrates his pawns with a keen sense of proportion. He squeezes out of them every ounce of their potential to startle the audience.

Others join the game as it turns murkier - a three-wheeler driver, a lottery ticket seller (Chhaya Kadam) and an unscrupulous doctor (Zakir Hussain). Trickery and treachery are rife as perception, projection and posturing weave a dark web that is headed only one way - into a moral abyss so deep that there can be no return from down there. The director leaves many of significant parts of the action, especially the gorier ones, to the imagination, a strategy that serves the purpose of keeping the audience guessing.

Lead actor Ayushmann Khurana has never been better: he hits it right out of the park - and then some. As good as she has ever been, Tabu, too, is astounding as a woman who exudes as much charm as deadly intent. Radhika Apte, playing markedly less tortured than she has been in most of her recent screen outings, is effortlessly pitch-perfect. Supporting cast members Chhaya Kadam, Zakir Hussain, Manav Vij and Ashwini Kalsekar also add their mite to the film.

Watch Andhadhun with your ears, eyes and minds open. You will come away with your senses heightened.