On Day 5 (Wednesday), AndhaDhun has raked in Rs 3 crore 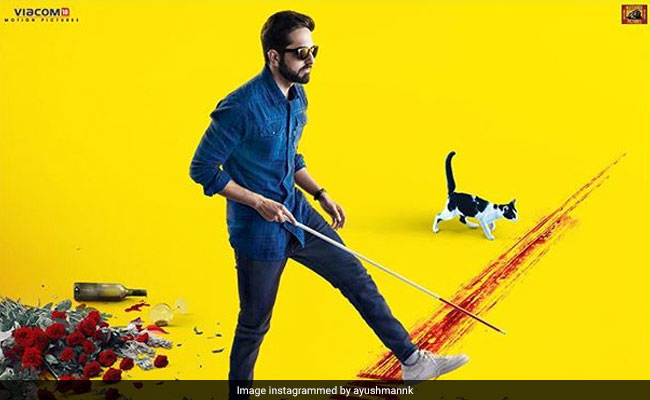 Ayushmann Khurrana in a still from AndhaDhun (Courtesy ayushmannk)

AndhaDhun featuring Ayushmann Khurrana, Tabu and Radhika Apte has managed to collect Rs 20.85 crore so far, Box Office India report stated. On Day 5 (Wednesday), Sriram Raghavan-directed film has raked in Rs 3 crore. Ayushmann Khurrana's film is expected to collect close to Rs 27 crore in the first week. "AndhaDhun had another strong day on Tuesday as it collected Rs 3 crore (nett). There was a drop from Monday but that is probably as it was a minor holiday at places on Monday. The collections are still well above the first day collections. The first week is heading towards a Rs 26-27 crore (nett) total which is good considering the film was not even Rs 2.50 crore (nett) on day one," the Box Office India report stated.

AndhaDhun clashed with Aayush Sharma and Warina Hussain's debut film LoveYatri. Directed by Abhiraj Minawala, LoveYatri started its box office journey on a "poor" note and has collected Rs 8.65 crore so far. "LoveYatri continues its poor run on Tuesday as it added 90 lakhs to take its total to Rs 8.50 crore (nett) plus. The first week is heading for around Rs 10 crore (nett)," the report stated.

AndhaDhun mostly opened to positive reviews. Saibal Chatterjee in his review for NDTV gave AndhaDhun 4 out of 5 stars. "Lead actor Ayushmann Khurrana has never been better: he hits it right out of the park - and then some. As good as she has ever been, Tabu, too, is astounding as a woman who exudes as much charm as deadly intent. Radhika Apte, playing markedly less tortured than she has been in most of her recent screen outings, is effortlessly pitch-perfect," he wrote.

Hollywood film Venom, starring Tom Hardy, hit the screens with AndhaDhun and LoveYatri. Tom Hardy's film has garnered Rs 20 crore so far. "Venom is slowing down as it stands on Rs 20 crore (nett) after five days and the film is depending on what it can collect on the second Friday," the Box Office India report stated.