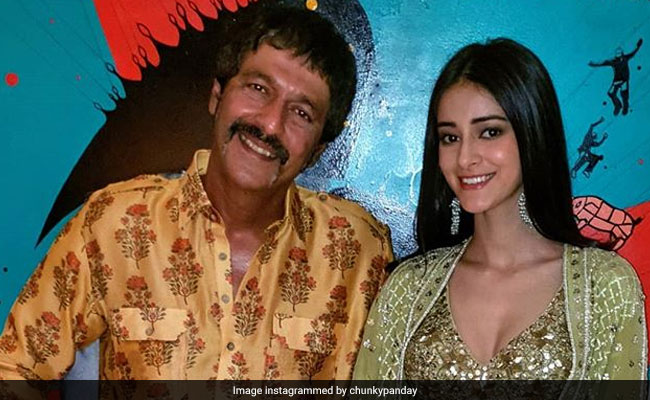 Student Of The Year 2 actress Ananya Panday opened up about how dad Chunky Panday helps her deal with trolls, shares career advice and his "I was wild" comment, in a recent interview with Mumbai Mirror. In another interview by the publication, Chunky Panday had said Ananya is not as "wild" as he was in the Nineties, which was seconded by the 20-year-old actress. However, Ananya added that she aspires to keep Chunky Panday's "legacy" alive: "I've heard so many crazy stories, people still talk about his New Year parties in the '90s, when guests used to randomly show up. I'm really not as wild as him but I would like to carry forward the legacy of his New Year parties," Mumbai Mirror quoted her as saying.

Earlier, talking about Ananya, Chunky Panday said that his daughter is quite unlike him. He explained, "I was wild; my daughter is nothing compared to me. I had a lot of wrong pressures on me. Being the son of two doctors, I was expected to become one too."

Ananya may not have inherited Chunky Panday's "wild party" skills but she's indebted to him for something more important: "I have inherited my father's thick skin, which helps me deal with trolls. My natural instinct is to ignore them."

Ananya Panday is the elder of Chunky Panday and Bhavna Panday's two daughters. She made her Bollywood debut with Karan Johar-produced Student Of The Year 2 this year. Ananya's line-up of films include Pati Patni Aur Woh, in which she co-stars with Kartik Aaryan and Bhumi Pednekar. Ananya also recently announced a new film titled Khaali Peeli, in which she will share screen space with Ishaan Khatter.