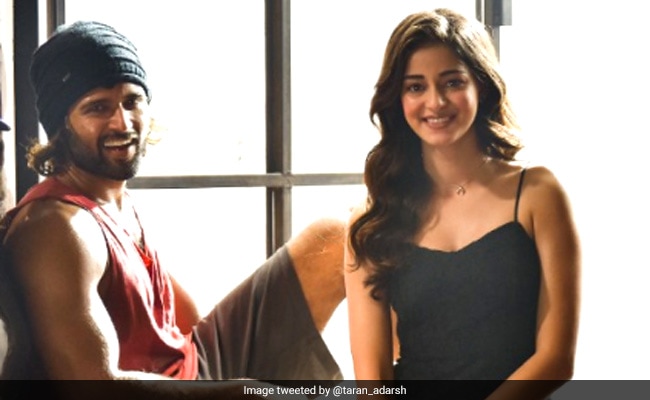 Ananya Panday is all set and "excited" to work with south star Vijay Deverakonda in his Bollywood debut film. The actress, on Thursday, announced her association with director Puri Jagannadh's multilingual film on social media and expressed her happiness and excitement with these words: "Happy, blessed and excited to be associated for a Pan-India film with our director Puri Jagannadh... Welcoming Mr. Deverakonda to Bollywood." She shared a set of pictures, in which she can be seen chilling with Vijay Deverakonda, Charmme Kaur and Puri Jagannadh. Charmme Kaur will co-produce the yet-to-be-titled film with Karan Johar and Apoorva Mehta.

While Vijay himself revealed some time back that he will play a fighter in the film, details about Ananya's character are yet to be disclosed.

Welcoming Ananya Panday onboard, Charmme Kaur tweeted: "Happy to welcome onboard gorgeous Ananya Panday for our Pan-India venture with Vijay Deverakonda... Let the madness begin." The film will release in Hindi and major South Indian languages.

Happy to Welcome on board Gorgeous @ananyapandayy for our Pan India venture with @TheDeverakonda directed by @purijagan, produced by @karanjohar@Charmmeofficial@apoorvamehta18

Earlier, talking about his Bollywood debut, Vijay Deverakonda said he has started shooting the film and he will dub his own lines for its Hindi version, reported newsy agency PTI. "I've started shooting for my first pan-Indian film with Puri Jagannadh. It's a project that required me to undergo drastic physical transformation and I've been working non-stop to pull off the character. I play a fighter and the role required me to learn mixed martial arts," he told PTI.

Charmme Kaur and Karan Johar (who will present the Hindi version of the film) announced the project in January.

To new beginnings
Shoot begins in mumbai from today @TheDeverakonda@purijagan@karanjohar@PuriConnects@DharmaMovies#VD10#PJ37#PCfilm#PanIndiapic.twitter.com/BSEJxt0R1e