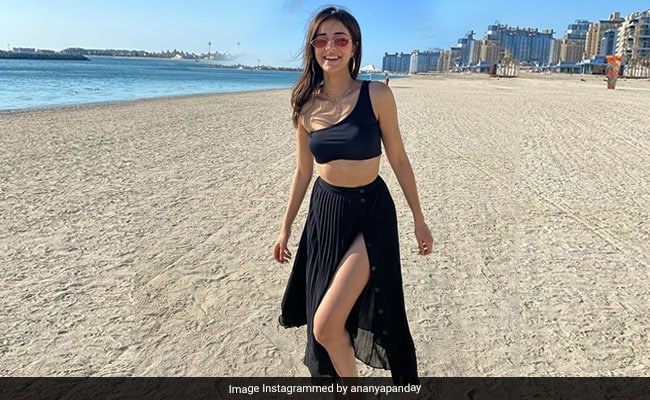 If you are having a stressful day, these pictures from Ananya Panday's Dubai vacation will cheer you up. But, but, but they will also give you major vacation goals TBH. The Pati Patni Aur Woh actress, who is currently holidaying in Dubai, shared a couple of pictures from her getaway on social media on Friday and we are in love with them. In the photographs, Ananya looks stunning in a one shoulder black crop top, which she paired with a sheer black thigh-high slit skirt. Sharing the pictures, Ananya captioned them: "Dubai, stay hydrated." Here's the photo we are talking about:

Several of Ananya Panday's fans flooded her post with comments such as "beautiful" and "gorgeous." One of the users even wrote, "Black makes you more attractive" and we couldn't agree more.

Ananya Panday made her debut in the film industry with Karan Johar's Student Of The Year 2. She starred along with Tiger Shroff and Tara Sutaria in that film. Post that, she signed a film with Mudassar Aziz - Pati Pati Aur Woh. The film released earlier this month and has since maintained to attract cine-lovers at the box office.

In Pati Patni Aur Woh, Ananya Panday co-starred with Kartik Aaryan and Bhumi Pednekar. The film is the Hindi remake of the 1978 marital comedy of the same name, directed by BR Chopra.

On the work front, Ananya Panday will next be seen in Maqbool Khan's drama comedy Khaali Peeli. She will share screen space with Ishaan Khatter in that film.