Ananya Panday Can't Believe She Made It To Deepika Padukone's Instagram Reels. What A Cutie, Isn't She? 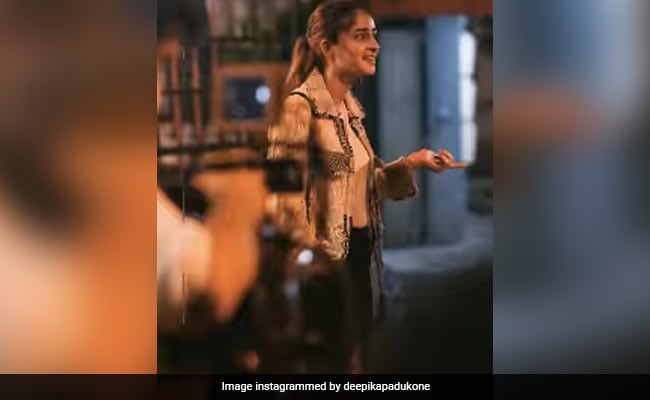 Ananya Panday in a still from the video.(Image courtesy: deepikapadukone )

Looks like Deepika Padukone is still not over the emotional ride that followed after the shoot wrap of Shakun Batra's untitled film, which features her, Ananya Panday and Siddhant Chaturvedi. The shooting for the film was wrapped last week, following which the team shared farewell notes on Instagram. On Monday, Deepika Padukone dropped a video featuring some amazing BTS moments from the film's set. The video begins with a very emotional Ananya Panday making it very clear that she doesn't "want the film to end." In fact, she said that she wants to be in the film "forever." Adorable, isn't she? Well, Ananya's comment on Deepika's post is even more adorable (more on that later). The video also features some BTS pictures of Deepika Padukone from the set of the film.

Among other pictures and videos, the clip features glimpses of how the team celebrated the shoot wrap on the set. We can see Deepika Padukone, Ananya Panday and Siddhant Chaturvedi celebrating the moment with a cake cutting ceremony. Sharing the video on Instagram, Deepika Padukone wrote: "It's a wrap."

Deepika Padukone's post received a barrage of comments from her Instafam but we cannot stop obsessing over an adorable comment from Ananya Panday, who is in "shock" to see that she made it to Deepika's Instagram reels. "Omg I made it to ur Insta reels #honoured #shocked #blessed," Ananya wrote in her comment.

Deepika Padukone, Ananya Panday and Siddhanth Chaturvedi had a blast shooting with Shakun Batra and proof of that is another post on Deepika's Instagram feed. On Friday, Deepika had shared a bunch of unseen BTS pictures from the film's set. The pictures capture some fun-filled moments that the trio shared with Shakun Batra. "Love, Friendship and Memories for a Lifetime," Deepika wrote in the caption.

Besides Shakun Batra's movie, Deepika Padukone has a series of films lined up for her. She will be seen co-starring with her husband, actor Ranveer Singh, in the sports-drama 83. Deepika Padukone will also be seen reuniting with her Piku co-star Amitabh Bachchan in the Hindi remake of The Intern. She will also be seen in Fighter, co-starring Hrithik Roshan.