"Shh... Work In Progress": Please Maintain Silence When Deepika Padukone Is On Sets

Deepika Padukone co-stars with Ananya Panday, Siddhant Chaturvedi and Dhairya Karwa in the yet untitled film 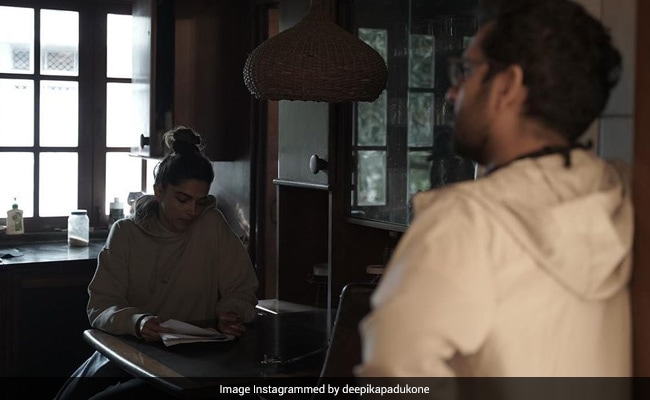 Actress Deepika Padukone shared a glimpse of her busy work schedule and looks like she's currently preoccupied with Shakun Batra's yet untitled film. Deepika Padukone, who has a rather unique approach towards her Instagram posts, shared a leaf out of her work diary on Thursday. Deepika Instagrammed a behind-the-scenes snippet from the sets of Shakun Batra's film and asked her followers to maintain silence because filming is currently underway. "Shh... Work in progress," she captioned the photo, which appears to be a first glimpse at Deepika's character from the film. Dressed in baggy loungewear - a sweatshirt and pants - Deepika wears her hair in a top bun in the photo. She can be seen busy reading sitting at a table while director Shakun Batra appears to be on the other side of the camera.

In the Shakun Batra movie, Deepika Padukone co-stars with actors Ananya Panday, Siddhant Chaturvedi and Dhairya Karwa. She reportedly plays the role of a fitness trainer in the movie but nothing has been confirmed by the makers yet.

The quartet of actors - Deepika, Ananya, Siddhant and Dhairya - are often spotted shooting for Shakun Batra's movie in and around Mumbai streets. Last year, the stars were frequently spotted traveling to and from Alibaug for the film's shoot - they were also in Goa for the film's shooting schedule.

In terms of work, Deepika Padukone has a series of films lined up - she will be seen co-starring with Ranveer Singh in Kabir Khan's '83, the release of which was postponed because of the pandemic. Deepika Padukone will reunite with her Piku co-star Amitabh Bachchan in the Hindi remake of The Intern. Deepika's upcoming list of films also includes Fighter, in which she will share screen space with Hrithik Roshan. Meanwhile, the shooting schedule of Deepika's new film with Prabhas, Project K, just took off.