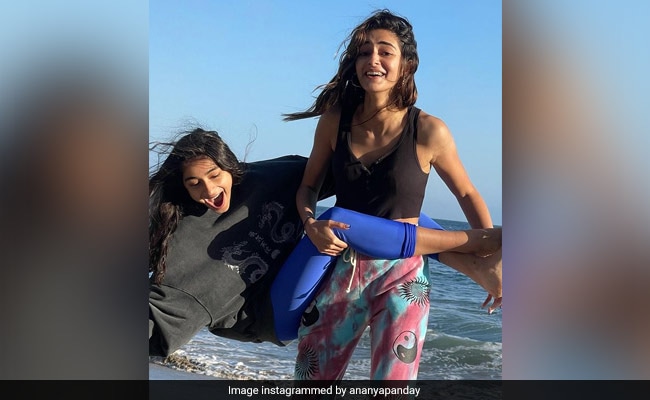 Ask Ananya Panday and her sister Rysa to pose for a decent photograph and be ready for hilarious results. Because that's what happens always when siblings get clicked together. On Monday, Ananya Panday posted a photo album comprising ROFL pictures of herself and Rysa and accompanied them with an equally-hilarious caption: "Literally any picture Rys and I have together." LOL. In the pictures, Ananya and Rysa can be seen goofing around at different locations - in park, on the beach and in a café. Reacting to the post, Ananya's BFF and Shah Rukh Khan's daughter Suhana commented: "Ricee" while Ananya's cousin Alanna dropped laughing emojis in her comment.

Check out the ROFL photos of Ananya and Rysa here:

Ananya and Rysa Panday are the daughters of actor Chunky Pandey and Bhavana.

In terms of work, Ananya Panday was last seen in Khaali Peeli. She made her Bollywood debut with Student Of The Year 2, in which she shared screen space with Tiger Shroff and Tara Sutaria. The film was the sequel to 2012's Student Of The Year. She was next seen in Pati Patni Aur Woh, co-starring Kartik Aaryan and Bhumi Pednekar.

Ananya has a couple of films lined-up now - she will next be seen in a film opposite Vijay Deverakonda (directed by Puri Jagannadh), as well as in Shakun Batra's romantic drama alongside Deepika Padukone and Siddhant Chaturvedi.