Rhea Kapoor shared a throwback featuring her parents and siblings 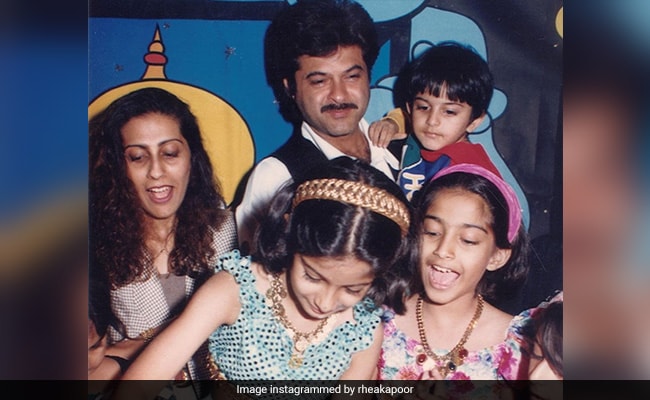 Rhea Kapoor made the best use of Throwback Thursday and took a trip down memory lane. She returned to reality with a bunch of memories from her childhood album, primarily starring her in princess avatars. Quite literally. Adding context to her childhood memories, Rhea Kapoor wrote: "Always been down for a fancy dress party or a silent overthinking session in my princess dress." Rhea Kapoor's post was flooded with adorable comments from her mother Sunita Kapoor and boyfriend Karan Boolani. But it's Sonam Kapoor's husband Anand Ahuja's reaction to one particular photo that has to be the coolest of them all.

The cover photo of Rhea Kapoor's throwback album is one featuring her parents Anil Kapoor and Sunita Kapoor, and siblings Sonam and Harshvardhan Kapoor. The photo appears to be a candid moment from a cake cutting session from one of Rhea's childhood birthday parties. Here's how Anand Ahuja described the scenario, using his imagination: "Rhea focused on cutting and serving the cake to everyone. Sunita Kapoor making sure the table is set properly and there's enough for everyone. Anil Kapoor looking at his daughters. Harshvardhan looking at his sisters. Sonam Kapoor looking vigorously at the cake!" 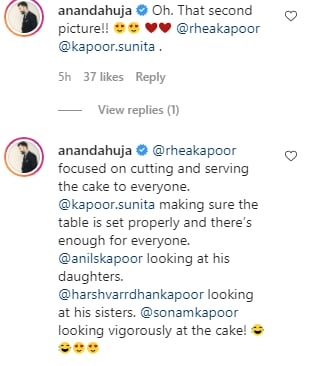 Here's what Anand Ahuja is talking about. Quite apt, huh?

Anand Ahuja officially joined the Kapoor family in 2018, when he got married to Sonam Kapoor in a big fat wedding in Mumbai. Sonam is currently in London with Anand Ahuja, where they have a home together. Sonam often posts about missing her family in Mumbai.