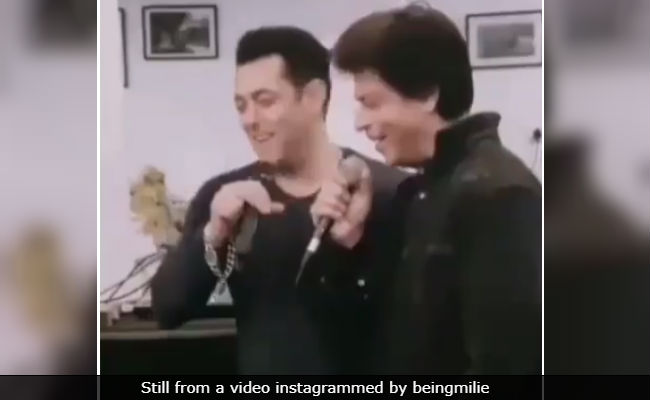 Trust the Internet to bring dig up entertaining videos featuring out favourite celebrities out of the blue. On Friday, an old video of Shah Rukh and Salman Khan singing Satte Pe Satta song Pyaar Hamein Kis Mod Pe Le Aaya (originally picturised on Amitabh Bachchan) was circulating on social media. The Karan Arjun co-stars got all the nuances and sang amidst loud cheers from an unseen crowd in the video. It cannot be confirmed when the video was taken. Recently, Salman Khan hosted a blockbuster party on his birthday at his farmhouse in Panvel. However, Shah Rukh was not among the attendees, which included the likes of Katrina Kaif, Sushmita Sen, Kriti Sanon, Anil Kapoor and Mouni Roy, among others.

Watch the old video, which has now taken over the Internet:

2018 was not kind to Salman Khan and Shah Rukh Khan, in terms of their respective films' lukewarm performance at the ticket window. Salman Khan headlined the cast of Race 3, which was panned by the critics and it collected a little over Rs 100 crore in India - which is a small figure for Salman Khan's Eid release.

Shah Rukh Khan's Zero released last week to poor reviews and it hasn't even crossed the Rs 100-crore mark in the first week of its release. Ranveer Singh's Simmba opened in cinemas today, which may impact the collection of Zero.

For 2019, both, Shah Rukh and Salman Khan, have interesting projects in the pipeline. Salman is filming Bharat with Ali Abbas Zafar while Shah Rukh is starring the biopic on astronaut Rakesh Sharma.