Amitabh Bachchan, in his letter to Rajkummar, which is written in Hindi, says that he's always admired Rajkummar Rao's work 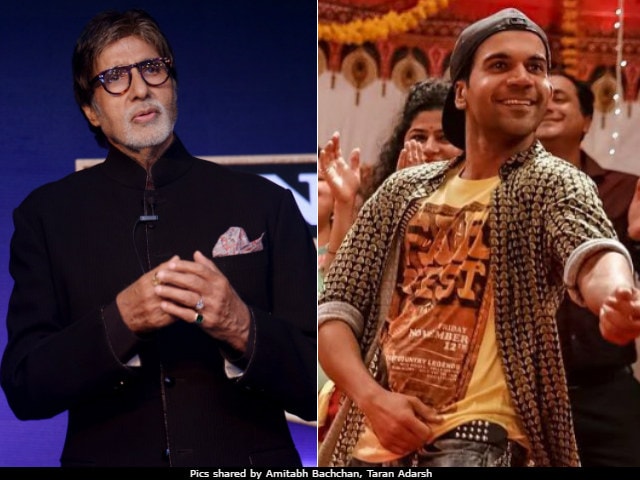 Big B tweeted that he the movie (courtesy tumblr, taranadarsh)

New Delhi: Amitabh Bachchan, a busy star, only recently watched Ashwiny Iyer Tiwari's Bareilly Ki Barfi, starring Kriti Sanon, Rajkummar Rao and Ayushmann Khurrana. From his tweet on Monday, we know that Big B loved the movie and reviewed it as "a delightful film" with "competent and excellent performances." But outside social media, Big B has singled out Rajkummar to be worthy of a handwritten note and flowers. The Trapped actor told tweeted a photograph of the note he received from the megastar, saying: "When the legend sends you this handwritten note.. Thank you my dearest @SrBachchan sir. You've made my day. Much regards and charan sparsh."

Amitabh Bachchan, in his letter to Rajkummar, which is written in Hindi, says that he's always admired Rajkummar Rao's work but he loved the 32-year-old actor's performance the most in new release Bareilly Ki Barfi.

Earlier in the day, Big B had tweeted to say: "Saw Bareilly Ki Barfi last night... a delightful film and such competent and excellent performances," to which Ayushmann replied this way:

Promoted
Listen to the latest songs, only on JioSaavn.com
However, Big B is not the only star to have watched and loved Bareilly Ki Barfi. Celebrities like Karan Johar, Varun Dhawan, Sushant Singh Rajput and Arjun Kapoor also had everything good to say about the film which released earlier this month. "Bareilly Ki Barfi is warm, funny and delightful. The performances are superb. Dialogues have many laugh out loud crackling moments," Karan had tweeted while Kriti's co-star Sushant wrote: "Kriti Sanon is brilliant and it's her best performance."

#BareillyKiBarfi is warm,funny and delightful...the performances are superb!! ! Dialogues have many laugh out loud crackling moments!

#BareillykiBarfi is such a pure &a complete entertainer.@kritisanon is brilliant & it's her best performance , @ayushmannk is honest (1/2)

and @RajkummarRao ,take a bow man !! You fly :) I wish #bareilykibarfi team all the luck and congratulations once again !! (2/2)