Big B often shares throwback photos from his earlier films 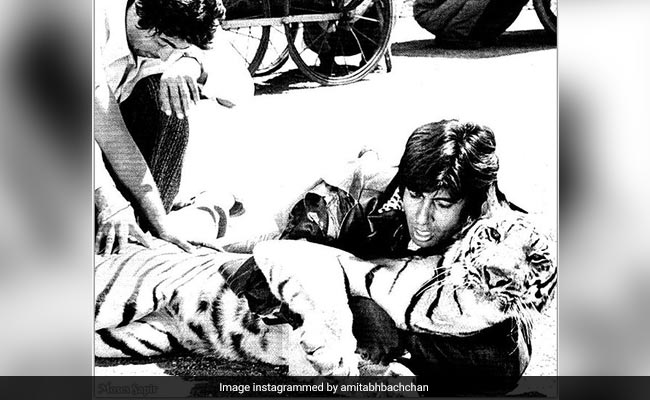 Bollywood's Big B is a treasure trove of tales for his fans. And, on a Saturday morning, Amitabh Bachchan opened up about yet one more interesting story from his life. The veteran actor often recollects incidents from his younger days in the film industry. Amitabh Bachchan has shared a black-and-white photo from the sets of Khoon Pasina. And, it has sent a chill down our spine. In the frame, we see Amitabh Bachchan struggling with a tiger [a real one] on the sets. Sharing the image, the superstar wrote, "Fighting a live tiger for the film Khoon Pasina... 45 years completed... Chandivali Studios, Mumbai. That's not all. The moment had another significance too, as Amitabh Bachchan was "waiting for news to come of the birth of Abhishek" during this shoot.

Amitabh Bachchan often shares throwback images from his earlier films. Once, he shared a behind-the-scenes image from the sets of Don. He is dressed in a white shirt, black pants and a shiny vest. The actor made a collage of this photo with the poster of the film and captioned, "Just before shooting the run in Don that became the poster."

Last month, Amitabh Bachchan gave us a huge throwback moment with hisSara Zamana famed jacket. He shared a collage of images from decades old live performance with the Rockettes of New York. Amitabh Bachchan performed the song Yaarana while wearing his iconic costume from Sara Zamana. He wrote, "Performing Yaarana song live on stage with the Rockettes of New York... Madison Square Garden, NYC and Wembley Stadium, London... 80,000 audiences…What a time...those were the days my friend."

Last year, Amitabh Bachchan completed 52 years in Bollywood. These years saw him grow into one of the most sought-after actors and inspiring personalities in the film industry. Celebrating the day, Amitabh Bachchan posted photos from his debut film Saat Hindustani. He wrote, "T 4089 - On  February 15, 1969, I signed my first film "Saat Hindustani" and it was released on November 7, 1969… 52 Years… today."

On the work front, Amitabh Bachchan will be next seen in Brahmāstra, Runway 34, Uunchai and an untitled film directed by Nag Ashwin.