Amitabh Bachchan Says He's A 'Misfit' On The Sets Of Brahmastra 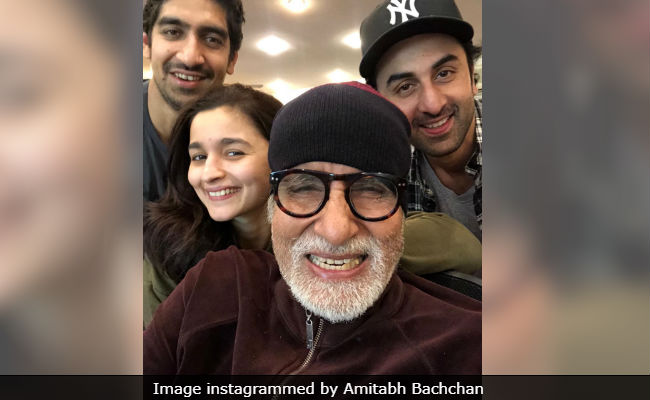 New Delhi: Amitabh Bachchan just gave us an insight into the sets of his upcoming film Brahmastra through his latest blog post. In his blog entry, Big B referred to himself as a "misfit" and confessed that at times he feels slightly "awkward" about being surrounded by younger artistes. "It is a bit awkward for me to be in the midst of this production where the average age on set is about 26 and I am the largest misfit at 76... I mean this is ridiculous... 76," read an excerpt from Mr Bachchan's blog. The 102 Not Out actor also put forth his views about the Indian cinema and said that he thinks Indian cinema in "great hands."

On his blog, Big B also addressed his co-stars Alia Bhatt and Ranbir Kapoor as "impeccable artistes" and wrote that it is an "absolute joy" and "a delight" and that he feels honoured to the share screen space with both the actors. Mr Bachchan was all praises for his co-stars and wrote: "The ease with which they work and rehearse and comply to the words and needs of the director is a learning for me. I love both and I love the work that they keep putting out year after year. Indian cinema is in very good hands and I can only wish it greater glory."

Only yesterday, Mr Bachchan shared a glimpse from the prep session of Brahmastraon his social media accounts with his Alia and Ranbir and film's director Ayan Mukerji.

Prep for BRAHMASTRA ... on tomorrow .. jitters

Brahmastra is a fantasy trilogy and it's first part is expected to release in 2019.The film also features Mouni Roy.

Other than Brahmastra, Amitabh Bachchan will also be shooting in Scotland for Sujoy Ghosh's untitled film. He will be next seen in Thugs Of Hindostan, co-starring Aamir Khan, Katrina Kaif and Sana Fatima Shaikh.
Comments
Amitabh BachchanBrahmastraAlia Bhatt Ranbir Kapor Bhrahmastra